‘So many things would have to happen – and it’s nearly impossible. I’m going to have the same mentality as until now, just work hard. We know Motegi won’t be like Aragon but I think we’re getting better and better. It’s a good circuit for my riding style but with our bike we struggle a bit here every here every year, but we’ll see because we also thought we’d be far in Misano but we were closer. To take points for the Championship is the most important, and if we can get on the podium, even better.’ 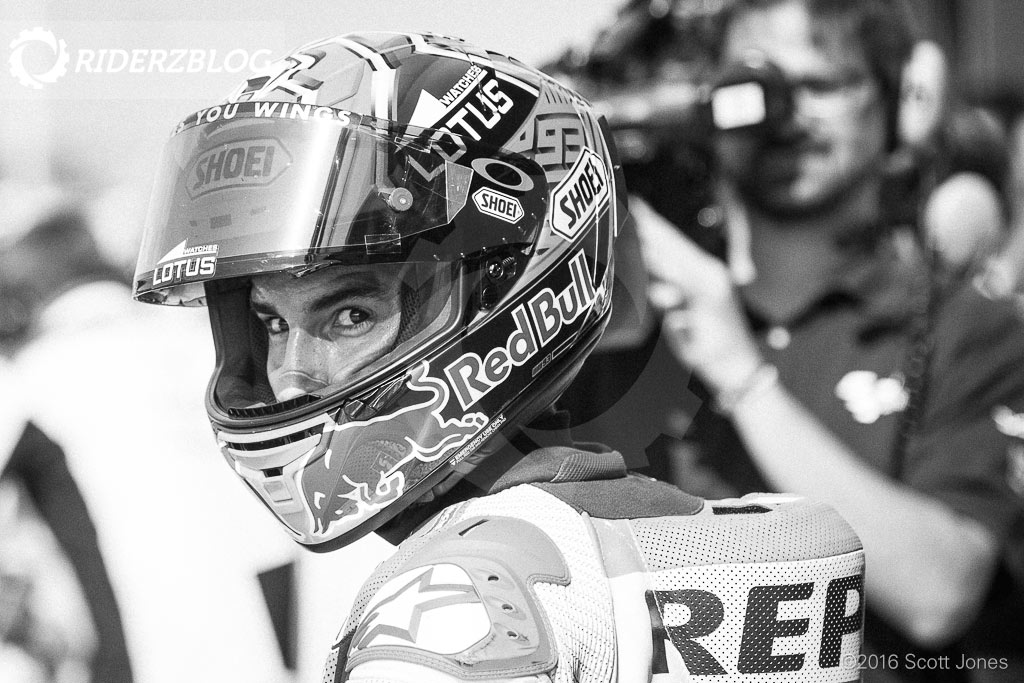 In a lot of ways, the 2016 season can be summarized with the race during the Motegi GP.

The almost impossibly slim chance that Marc Marquez could be crowned the world champion at the end of this round was overwhelmingly stacked with not just one, but two unlikely odds; Valentino Rossi would need to finish the race lower than 15th, and Jorge Lorenzo no higher than 4th. Despite the pendulum of circumstances of the previous fourteen rounds of the season, this race was held under glorious conditions, meaning that the mathematical probability of Marquez’ chance to be a world champion seemed further dimmed by the clear and bright daylight of this year’s Japanese round.

Then again, it’s not as if the Repsol Honda rider fancied his chances of wrapping up the championship at the end of this round. Despite a dominant win at the previous round in Aragon, Marquez and his crew had already pegged Motegi as another round in which they would need to limit the damage to their championship campaign, as evidenced by Marquez’ words above to start off the weekend. And despite a strong showing of form throughout the weekend – Marquez led two of the four practice sessions, the warm-up session, and nearly took pole position before Valentino Rossi secured it – all it forebode was that Marquez and his team were executing their game plan of damage limitation for this round. That was all they and the rest of us following the weekend’s proceedings would come to expect. 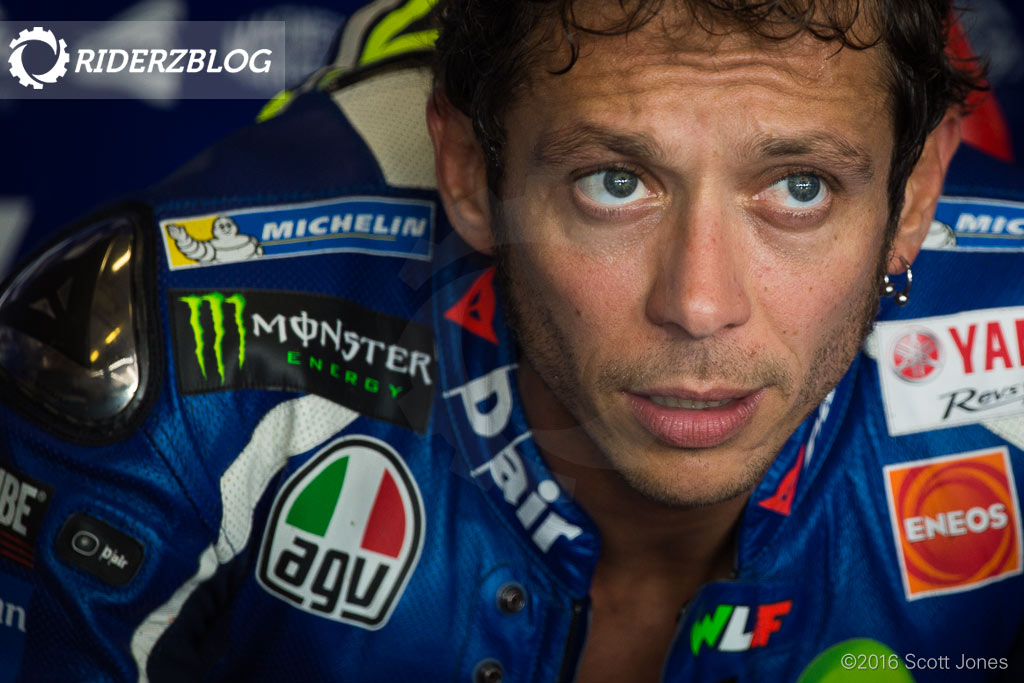 So all expectations aside, the turbulent momentum of the 2016 MotoGP championship finally came to an almost fitting, albeit virtually impossible conclusion.

Valentino Rossi would crash out of the race on the fifth lap from second position as he was chasing Marc Marquez, the Italian losing the front of his Yamaha YZR-M1 on the right-handed Turn 10 of the circuit. While Rossi would go on to remount his machine and return on track, the Italian immediately pulled into the pits, eventually retiring out of the race altogether. With a no-score from the Italian Yamaha rider, his chances of contending for the title for the remainder of the season went out the door as soon as he stepped foot in his garage as the race went on.

One down, but there was one more to go as Jorge Lorenzo continued to circulate in the race having inherited second position from his teammate. Lorenzo was putting on a Herculean show following a dramatic highside crash earlier in the weekend during one of the practice sessions. That the Spaniard could even ride a motorcycle following that incident was a miracle, but that he would be on the podium hunt in the race was unthinkable. For eighteen of the twenty-four laps it seemed Lorenzo may just pull off a race finishing position that would push Marquez’ title hopes forward to the next coming rounds, until on the nineteenth lap when Lorenzo would lose the front on his machine at the left-handed Turn 9, the Spaniard unable to remount his machine to rejoin the race at all. 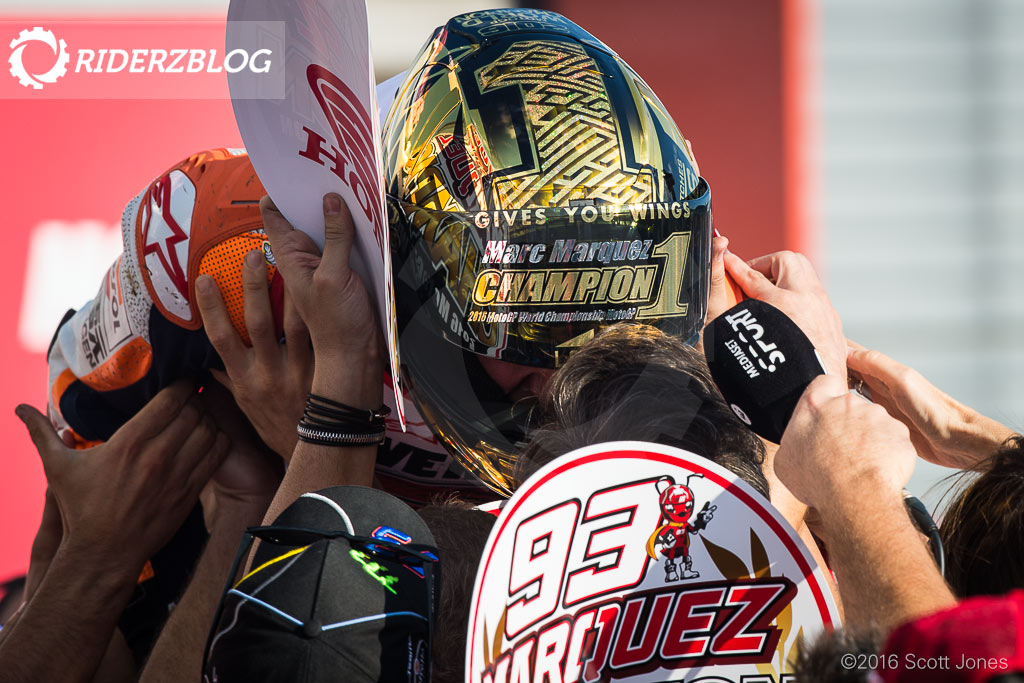 None of this was supposed to happen at this round, much in the way the season has gone wasn’t supposed to have gone the way it has. But in the end, as how the story has been throughout this tumultuous season, Marc Marquez and his crew simply did all they can in this race while the rest of their competitors stumbled amongst themselves, like they have from time to time throughout several rounds.

As the old racing adage goes – you have to be in it to win it. And if nothing else Marc Marquez has been there in every end when everyone else wasn’t. While his rivals clearly lost their title fight on their own, Marquez fully deserved to take this title based on the young rider’s resiliency and consistency in every round.

Marc Marquez then becomes the 2016 MotoGP World Champion as the young Spaniard took the checkered flag of the Japanese round at Motegi, the 23-year old now becoming a three-time MotoGP world champion, and a five-time world champion across all three classes in the last seven years.