A few weeks ago, I finally managed to regain the remainder of my garage space after the previous roommate got the last of their stuff. This meant that I now had the room and freedom to set things up the way I wanted. I had a few things in mind that had been goals when I rented my own place to begin with.

First off, I wanted room to work on my bike(s), and to be able to get into a project, and not have to worry about leaving it sit if I needed to. I didn’t want to have move around bikes that were half torn down, or worry about accidently breaking something that was lying around.  Secondly, I wanted my track items easy to access for quick loading and unloading. Third, a table or workbench I could leave set up and that wouldn’t get in the way of any daily activities. Lastly, I wanted to be able to set up my other work areas and have my shelves organized so I wasn’t wondering where things got stuck, while still able to get my trailer in and out without drama.

On a bit of a spending spree at Costco I picked up a set of shelves that I figured would work well for my needs, and then decided to get another folding table that I could leave set up in the garage. Since my house is just a rental, I didn’t want to invest in building anything in (which would have been more ideal) and I figured a second table might come in handy on occasion. Next up was getting it all organized.

There was still some general cleaning up that needed to be done, since previously it had been really hard to move around in the garage and some things had just gotten stacked on, in front of, etc, but that needed to go. So I went through the existing shelves, picked up the random items that had been stuck places, broke down the empty boxes, and generally cleaned up. Got a few things moved around to better places, got the tire “machine” a friend is letting me use set up, and put the new things where I wanted them. I was also trying to set up so that I had room for additional bikes, since I’m planning to add one of my own this winter, plus if I rented out the spare room, there’d likely be another bike or two from a roommate.

The final result I’m pretty happy with. Where I’ve got my current race bike, I can angle a couple of bikes into that spot and still have room, so the new bike won’t be an issue at all. Plenty of room for another street bike as well. Table is all set up, and the tire changing area is open enough to work in. I put a rug down below the race bike/work area for a little knee comfort and to help keep bolts and nuts from rolling away. The sinks are all open and easy to work in, and all my tools can easily be accessed. 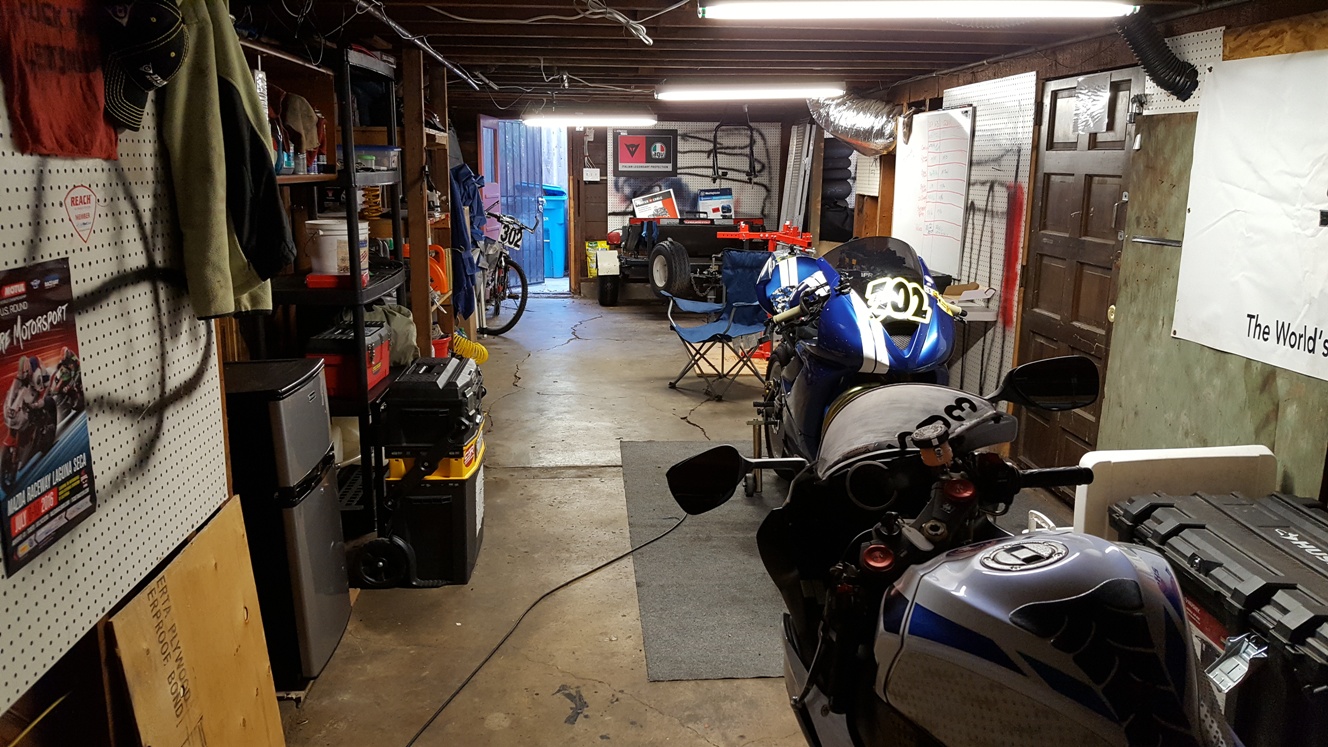 Final touches included a mini fridge with some beers in there, and I’d like to add a TV down there too – I’ve got a TV I can use, just need to decide the best way/location to mount it and hook it into my cable. Some decent speakers for the phone would be a great little thing to add as well. Overall, I’m pretty happy with the layout for what I’m working with – my garage is long and narrow (and low), so some things can be a bit of a challenge, but the current layout seems to be working pretty well.