After the last AFM round, Ken Hill (khcoaching.com) had watched my videos. I had been feeling pretty good about seeing sub-2 minute laptimes at Thunderhill, and was pretty stoked with the progress. Right up until Ken called and told me “we need to fix your braking. There’s two seconds to be had on your brakes.” Aw damn, I knew my braking needed work (that’s usually where I was getting passed), but I was a little doubtful about there being a full 2 seconds to find – but, I wasn’t going to argue with someone who does this with far better riders than myself, so we set up a plan to discuss some drills for my next day at the track.

In addition, Catalyst Reaction Suspension had resprung my rear shock, so I was also going to be testing that out to see if it helped. I talked to Ken in the morning, and got some vision drills to work on. I headed out and started putting everything to the test. Well, both things seemed to be working, but the changes meant I was on the phone with Jim over at Catalyst to work through getting everything working together.

I started to see my times dropping down close to my previous race times, including some 2-flat laps, despite a fair bit of traffic. I knew I could manage another sub-2 with the improvements, and was hoping to see that at some point. At lunch Ken gave me something different to work on, so focused on that in the afternoon. By the end of the day I could see changes, but wanted to see how things were the next day once I had a chance to sleep on it.

The next day was looking to be a nice day, albeit likely a bit warmer due to the lack of a breeze. The morning sessions didn’t go so well, as I basically only got one session in due to red flag delays, which meant I barely got a chance to get warmed up. I knew I needed to make use of the afternoon. I headed out after lunch for a truncated session, then decided that the next session would be my time to really get out there and put in some fast laps. I grouped up with a couple friends, and we headed out. Eventually we started to actually duke it out a bit, and I decided to ‘real world’ test some of my new braking techniques, and put some passes on people in places where historically I had been getting passed. 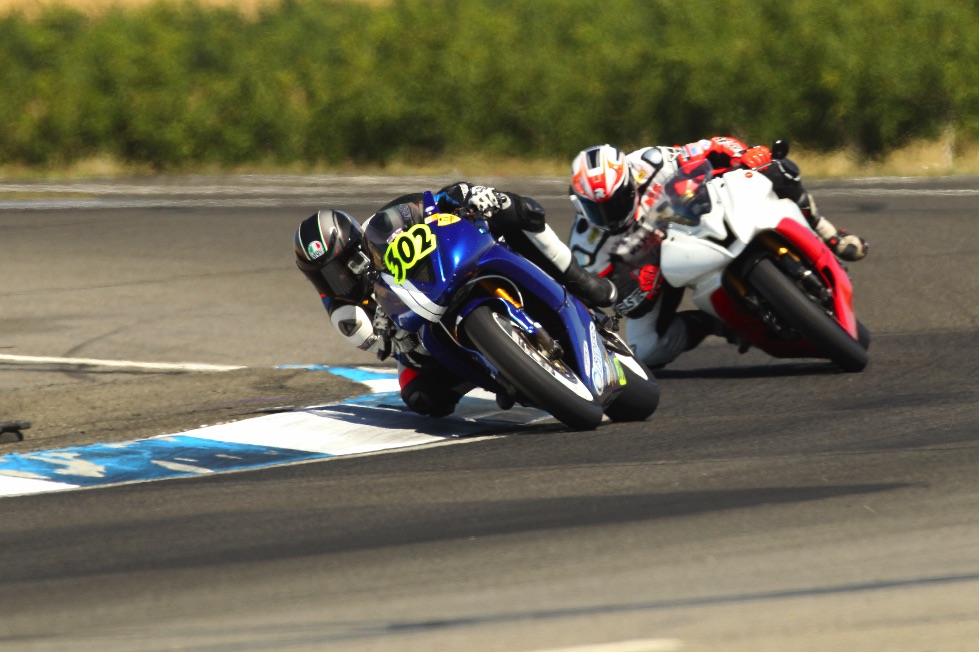 The session was a blast overall – at one point going into Turn 14 the bike started to “back in” – while I didn’t feel out of control, that did spook me a tad since it was a completely new sensation on pavement! I also started floating the front wheel all the way down the hill off of turn 9 – that was actually a fair bit of fun, something I had never done before either, but enjoyed that one!

I pulled into the pits and checked my laptimes – I was shocked. Sitting there on my laptimer was a 1:57.66! There were a couple other 1:58s as well, but that time was a shocker! 2 ½ seconds off my best race time at the last round! Well, I guess Ken knows what he’s talking about LOL….I was SO stoked to see that time. That felt pretty darn legitimate, and I knew there were still places I could squeeze out a little bit more, especially once the things I was working on became a bit more habitual and I had a little more time to make them a normal thing rather than something I was having to think about.

I was seeing the track differently. A time like that, during a track day none the less, left me feeling like my goals were far more achievable than I had previously believed. It went from thinking I could do it, to KNOWING I could. Caption: On my way to that 1:57 in Turn 2 at Thunderhill. Photo by gotbluemilk.com

There’s not enough “Thank You’s” for the folks who’ve helped me out thus far. First and foremost to Ken Hill for all of his patience and suggestions, the man is amazing at seeing what a rider needs and pinpointing the technique needed to fix that issue. Rather than spinning my wheels trying to figure out how to fix something, instead I have had a focused plan with specific things to work on, and that is paying off in huge dividends.

Ken also lined me up with Cameron Gish a couple times, so can’t thank him enough for his time as well. Cory Call took a fair bit of time one weekend to help me out and fix some major issues. Several others have offered advice throughout the year, but without these guys, this wouldn’t have happened yet. Their help and willingness to share their knowledge has exponentially changed my riding, and I’m so very excited to see where it goes from here.