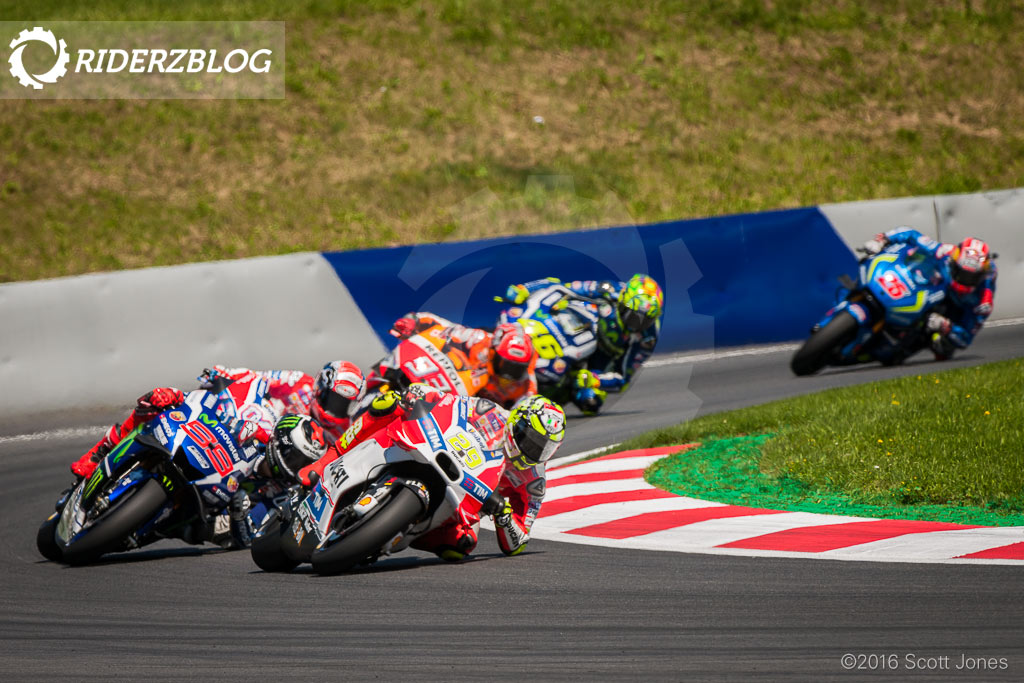 MotoGP returns from its summer break with round ten of the series at the Red Bull Ring circuit in Spielberg, Austria, welcomed by glorious Austrian sunshine during race day. While the weekend started off very cold – I heard commentary that just a week prior it had snowed – the temperature only continued to rise to mid-70 degrees Fahrenheit Sunday afternoon. The action began well before the race on Sunday, however, as the second Qualifying session of the weekend produced one of the best final qualifying minutes that I can remember in recent times.

Ducati had been ear-marked to take it all in this round, the Ducati machines showing great promise in their competitiveness at this circuit from a private test they held here just a few weeks prior. Satellite Ducati riders like Hector Barbera, Eugene Laverty, and Danilo Petrucci had beamed about how well their bikes worked around the track, and would place their bets on the factory Ducati squad of Andrea Dovizioso and Andrea Iannone having a race of their own at the front if Sunday produced a dry race. True enough, all but the first Free Practice session were topped by a factory Ducati rider.

But Qualifying was almost a different story.

A resurgent Jorge Lorenzo would find himself taking pole position from both Dovizioso and Iannone with less than two minutes left of the final Qualifying session, the Spaniard buoyed by the ideal conditions of the weekend. Dovizioso would threaten to take it from Lorenzo a minute later, but the Italian would lose out on the final sector, which would be story for his Ducati teammate Iannone and Lorenzo’s own Yamaha teammate Valentino Rossi, the other two Italians en route to snatching pole position from the Spaniard, only for their final sectors to rob them of time. All three riders would cross the line behind Lorenzo with just over ten seconds left of the session, enough for a final attempt for each to steal the pole position. And steal they did, as Dovizioso would snatch it from Lorenzo after all, only for Rossi to do the same, then Iannone, for an all-Italian front-row. It was one of the most nail-biting twenty seconds of a Qualifying session I have seen to date.

Repsol Honda rider Marc Marquez would qualify for the race in fifth position, the young Spaniard having dislocated his shoulder during the third Free Practice session the day before. He was able to return to action during the fourth Free Practice session after his shoulder was popped back in and taped up for support, making his qualifying efforts that much more heroic.

During the race, Marquez would never threaten at the front, but the injured Spaniard put up a valiant effort to not concede his position to the very end, finishing exactly in the same position he started with. Not even a healthy Maverick Vinales – whose competitiveness on his factory Suzuki returned with the ideal conditions – could pass the Repsol Honda rider during twenty-eight laps around the circuit.

Marquez’ grit proved crucial during what has been an otherwise bad weekend for him. Despite the injury, Marquez would only give up five and two championship points to his closest rivals Lorenzo and Rossi respectively. He continues to lead the championship forty-three points ahead of Jorge Lorenzo.

With MotoGP making its way to the Czech Republic in less than a week’s time, we will find out soon enough whether Marquez can continue to limit the damage to his title campaign.

A Return to Form

Factory Yamaha teammates Jorge Lorenzo and Valentino Rossi would finish in third and fourth respectively, the Yamaha teammates providing the only hope of taking the fight to the factory Ducati riders of Dovizioso and Iannone. Valentino Rossi would take the fight to Iannone early on, leading at the end of the first lap from his starting position of second on the grid. Lorenzo would also challenge the Ducati riders, even making his way to second place for a handful of laps behind Iannone, having started the race in fourth. As much as they could, the factory Yamaha riders tried to keep the Ducati riders within striking distance.

But it was indeed a race for the factory Ducati riders to lose, the sheer grunt of their motor and their stability on the brakes making it impossible for the other riders to pass them on either end. For every time either Dovizioso or Iannone would get overtaken, they would be quick to retaliate, and with much more relative ease than it took for their competitors to make the move on them. For about six laps the Yamaha riders were able to annoy the Ducati riders, but then after that it was indeed simply a race to be had between the factory Ducati riders.

Jorge Lorenzo would finish in third, back to his punishing form of speed and consistency that his teammate Valentino Rossi just could not match, the Italian never able to overtake his Spanish teammate for twenty-six of the twenty-eight laps.

Lorenzo would celebrate his third-place finish as if it was a win. Considering his results in the last two rounds, it would be unfair to call his joy an exaggeration.

As it had been expected well before the race, the factory Ducati riders indeed had a race of their own, Dovizioso and Iannone having been left to their selves at the front to battle for the win still with twenty laps remaining of twenty eight. Differing talents on equal machinery and different tire choices on each of their machines, as Andrea Iannone would opt for a medium option rear tire on his bike at the last minute when the rest of the field opted for the harder option, including Dovizioso. Iannone’s plan was to pull away at the start of the race then manage the remaining laps, but his teammate had other ideas, Dovizioso leading Iannone for ten laps once they both broke away from the chasing Yamaha riders.

Iannone did all he can to make sure his teammate did not get away though, and with eight laps remaining he would pass Dovizioso and proceed to set the fastest time of the race on the 24th lap, his gamble paying off with his choice of tires becoming an inspired choice, managing his grip to last him the race distance and take the checkered flag ahead of Andrea Dovizioso, marking the first win for Iannone in the premier class since joining the grid in 2013.

I don’t know how much it is by stroke of luck or stroke of genius that Iannone would choose the softer option of the two for his tires. While the factory Ducatis were favored to take the win, Iannone may have realized that he needed another ace in his sleeve to beat his teammate who was otherwise on equal machinery as him. That ace simply came right down to the choice of tires, a masterstroke move in a game of high-speed chess that left Iannone the only king at Ducati at the end of the race. 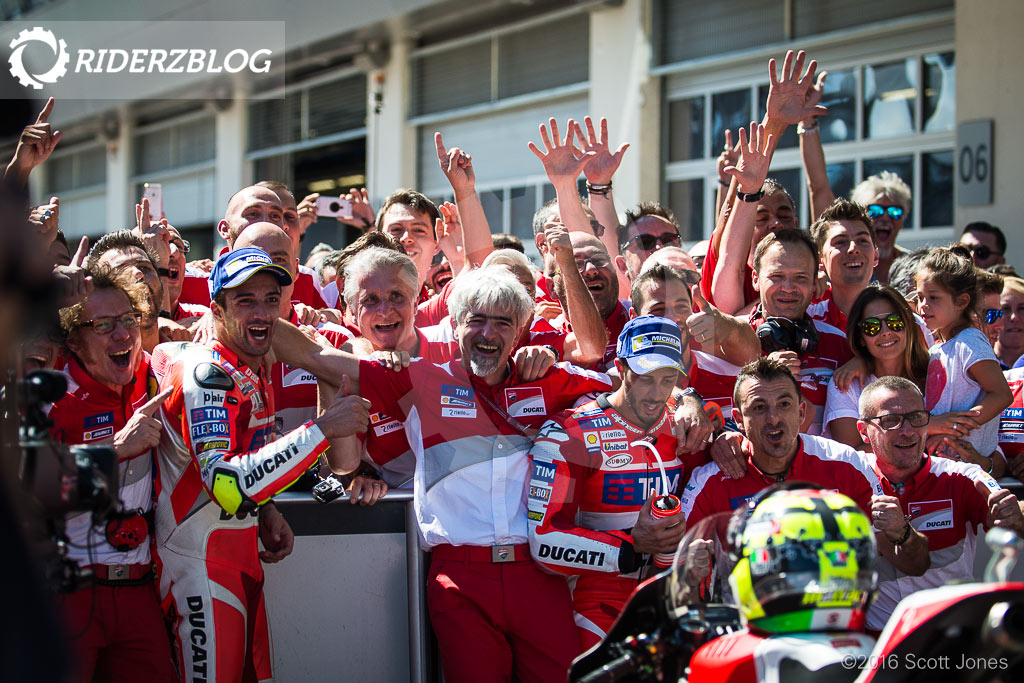 It had taken two and a half seasons since Gigi Dall’Igna was hired to head Ducati’s new MotoGP program, but Ducati finally ended their drought of wins since retired rider Casey Stoner last did it for them in the Phillip Island round of the 2010 season, over half a decade ago. This would also be Ducati’s first 1-2 race finish since 2007, when Stoner and Capirossi last did it nearly a decade ago.

There is a bit of irony that Ducati may have been put back on the era of winning ways by Iannone, the rider exiting to Suzuki at the end of the season to make way for Jorge Lorenzo.