As my riding has continued to improve, I’m finally getting to a point where my current bike is beginning to hold me back. When I’m on point, there’s not much more I could squeeze out of it. Part of me is a bit surprised by the progress, part of me knows it still needs some consistency and habit-forming, but it’s there, and I’ve turned some laps that prove I’m capable of riding the bike to what it can do.

This means that I’m meeting or even exceeding my goals on this bike, and my plan at the start of the year was that if I could accomplish certain things, then this winter I would step up to a new bike that would remain competitive for a few years, regardless of rider. I also wanted to step up to the liter bike classes, since that’s what I’ve wanted to race right along – but I also knew I needed to learn the skills to not immediately kill myself on a new supersport 1000.

So, with that, and what has happened this year, I’m beginning to think about my next platform. I already knew I didn’t want a Suzuki – they are just now coming out with the new ones, and they haven’t been out to show what issues will crop up. Plus, while my street GSXR is a solid bike, it’s not one I’d want to race. That left the new ZX10R by Kawasaki, the BMW S1000RR, or the new Yamaha R1. I test rode the BMW at Laguna and loved it, so that one easily made the short list. A very user friendly bike, that out of the box was almost ready to go as is.

That meant I needed to try the others to narrow the list further. Although historically not a fan of most Yamahas, many people loved theirs, so had an opportunity to give that a shot. My first test ride, I hated the bike, but since another opportunity to ride one came up, I gave it another chance. I still hated it. The bike just didn’t fit me or my riding style – at all. I’d have to do a ton of work just to have it comfortable sitting on the stands before I even rode it anywhere. Nope, cross that one off the list! I had already sat on the new ZX, and I knew that fit me, as did the BMW. The first ZX10R I test rode in TN.

After the R1 test rides, the list got narrowed to the ZX10R or the BMW. I had yet to test the ZX on track, so a friend let me take his for a spin on day at Thunderhill. I liked the bike, in fact, I loved it. Same thing had happened with the BMW. Well, that made my short list choices tough – I like both bikes, both fit me, both come with good packages. Aftermarket parts prices were similar. OEM, well, Japanese parts are cheaper. The Japanese bikes are also easier to find dealers and mechanics who are familiar with them, at prices that are a little more affordable. But the bike would require a few more things to get ready than the BMW. It is looking like a toss up.

I arranged to talk to Ken Hill about the bikes, figuring he’s seen and probably ridden both, and worked with top riders on both. Other riders who I had talked to didn’t seem to do a great job of evaluating the differences – it was “get this one!”

…or some similar response, none of which were very useful.  My own test rides only told me that I liked both bikes well enough. So I wanted to hear another, perhaps less biased, opinion.

Ken had some great points on both bikes, and did a great job of breaking down what he felt were strengths and weaknesses of both bikes, potential issues, and his own feelings on the matter. I think this really helped clear things up, and moved that proverbial pendulum a little further in the direction that it was starting to lean already.

Since I’m not running to a dealer to buy a bike tomorrow, I still have some time to think, but it’s feeling more and more like that decision is being made. As of the time of typing, right now I’m strongly leaning towards that new Kawasaki sitting in my garage sometime this winter 🙂 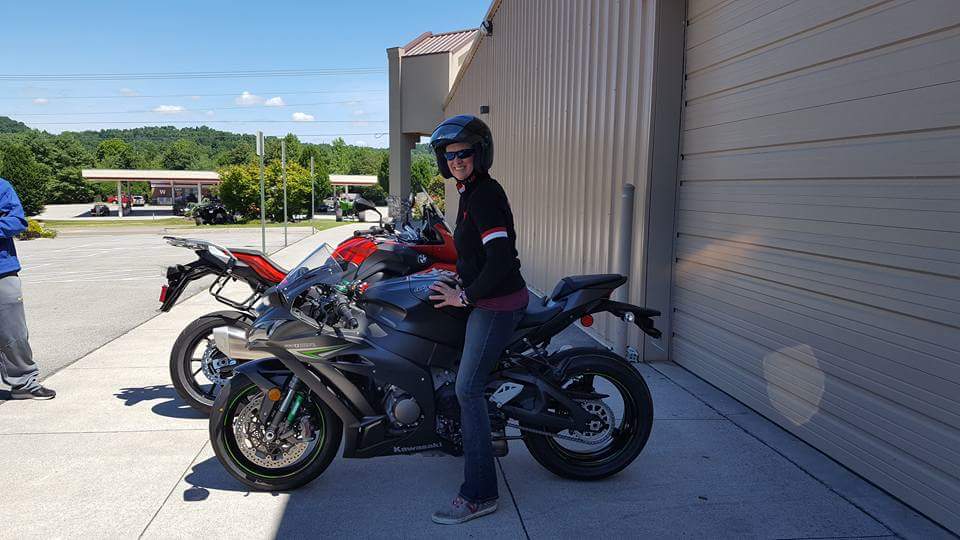 Wasn’t planning on riding this trip, so borrowed what gear there was to borrow!