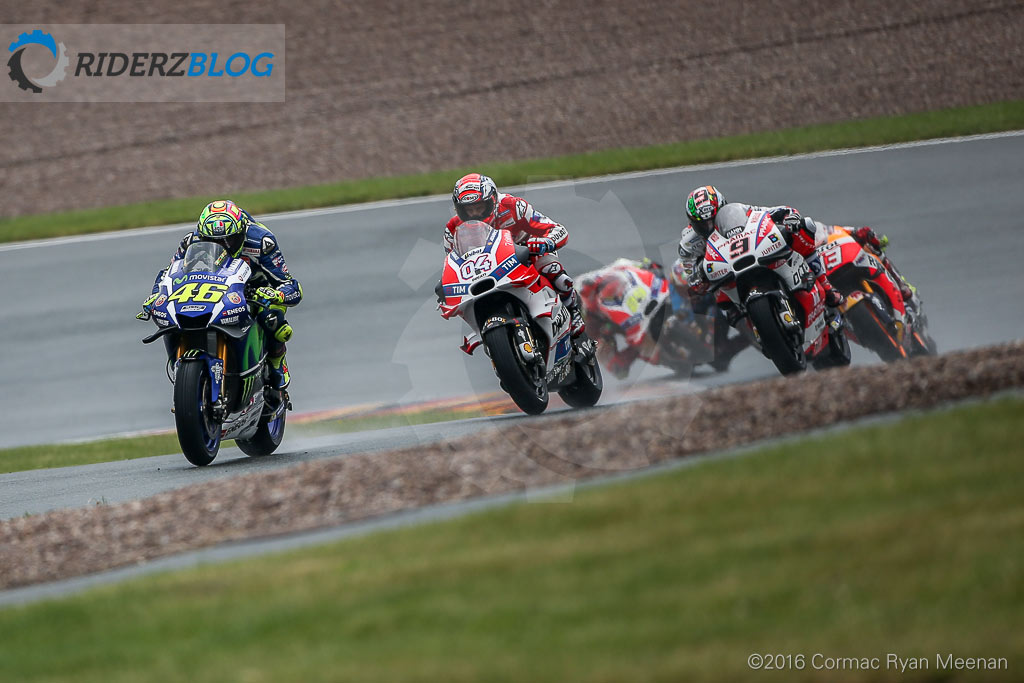 Not too long into the start of the race I started to think that I was watching the Assen GP again.
Another wet race, and while Valentino Rossi gridded at the start behind Hector Barbera in second and Marc Marquez on pole, The Doctor would go on to take the lead in the race early on, followed by Andrea Dovizioso on his factory Ducati GP. Even Pramac Ducati rider Danilo Petrucci made his way to the front, eventually leading the race for seven laps. And wait, who is that making ten places after just the first lap, from 16th on the grid to 6th place? Jack Miller.

Holy hell. It’s the Assen GP all over again.

And much like in the previous round where Petrucci would not finish due to a mechanical on his satellite Ducati, he would once again not finish the race, this time crashing out of the lead on the tenth lap of the wet but drying race. It was Dovizioso who would take over in the front, followed closely by Rossi for the next twelve laps. It was just like the Assen again, the two Italian riders leading the race though simply having switched places.

Would the rain return, and would both the Italian riders again make costly mistakes and crash out this race? Could Jack Miller follow his historical win at the previous round with a second podium finish, if not another win? After all, this was looking like the Assen GP all over again.

The rain never returned and the Sachsenring circuit started to dry out, a thin sliver of a drying line on the tarmac only getting wider as the fire-breathing machines of the MotoGP class made their way ‘round and around as each lap ticked away. The race wouldn’t be red-flagged as it was at the Assen GP, but at just over half race distance the riders started to pit in to swap their bikes fitted with rain tires, for their second bikes fitted with either intermediates, or a combination of intermediates and slicks. Each rider’s second bike and its tires were the rider and the team showing their hands, but the race wouldn’t come down to just who took the best gamble.
It would be won by those that went all in at the right time.

Not that I even thought it possible, but Jorge Lorenzo had an even worse race weekend than he did in the previous round. After three crashes throughout the weekend’s practice and qualifying sessions, Lorenzo would qualify 11th in the race and never threatened the top ten. And while Lorenzo would benefit from the number of riders crashing out of the Assen GP to finish in 10th place, he would go on to finish this round in 15th for the final point-scoring position of the race.

The Spaniard is clearly still wrestling with his water demons, and he seems to not have the confidence that this year’s new Michelin tires are what he needs to break the surface.

Unlike the Assen GP where Race Direction made the call of stopping the race and restarting, effectively making the call for the entire grid of starting fresh again, in this round it was every riders’ choice to make the call. While each team would communicate to their rider via pit boards of when to come in, or perhaps start to think about coming in, it was ultimately the rider’s choice of when they would do it as they came around after each lap seeing the message on their board.

As the track continued to dry, Dovizioso and Rossi would continue racing on their deteriorating rain tires, Dovizioso visibly going off of the drying race line at times to cool his overheating rain tires over the wetter parts of the track. Cal Crutchlow, on board his satellite LCR Honda, would eventually find the grip and feel on his harder-option rain tires and made it all the way to third place behind Rossi after twenty two laps lap, having started the race in 13th.

As some of the other riders behind them would start to pit-in for their bike change, the leading riders would continue on racing their wet tires over a drying circuit, some citing their doubts of whether swapping bikes sooner rather than later would be any better, while some cited simply not having seen their pit boards communicating to them to come in for the swap.

Twenty two laps of thirty had passed before Dovizioso, Rossi, and Crutchlow would enter the pits and swap their bikes, leaving the Australian Jack Miller on his satellite Honda leading the race for two laps. Miller would not replicate his win at the previous round, but the Australian did take his next best finishing result of 7th since joining the premiere class. Meanwhile, Dovizioso, Rossi, and Crutchlow would rejoin the race on their second bikes, Rossi having opted for a pair of intermediate tires, Crutchlow for a pair of slicks, and Dovizioso with a combination of both running an intermediate on the front paired with a rear slick.

Depending on who dared most, each riders’ choice of rubber eventually sealed their fate. Cal Crutchlow would benefit the most in the remaining laps as he would take his first podium finish of the season to take second, while Dovizioso snatched the final podium from Scott Redding to take 3rd in the race. Valentino Rossi lost out the most, finishing in 8th position, his lowest position throughout the whole race. 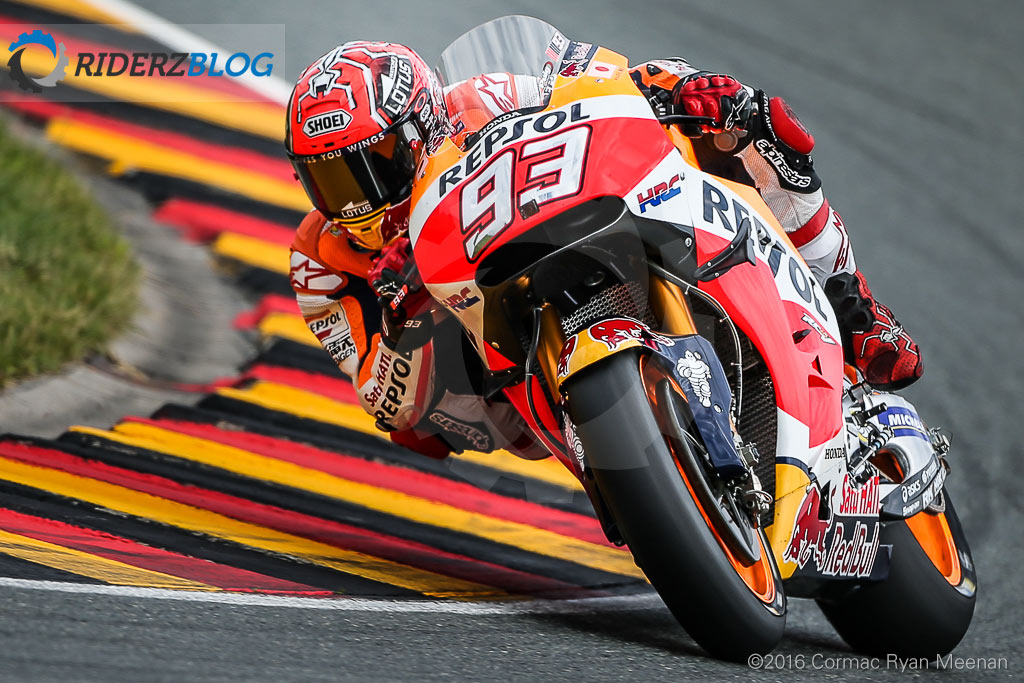 The victory would come to Repsol Honda rider Marc Marquez, as the young Spaniard and his team went on to show the rest of the grid, yet again, how to manage a difficult situation.

While Marquez held the pole position for the race, the Spaniard would encounter difficulty during the wet part of the race, steadily dropping places in the first seventeen laps, as far back as 9th place. With nothing to lose, Marquez would swap bikes at the start of the 18th lap, opting for a set of full race slicks as decided with his team prior to the start of the race. Apparently, to Marc Marquez and his team, the intermediate tires do not exist to them as an option for a race:

‘When you’re on the track, you must be clever in all these aspects. With the team, we speak before the race and say, ok, we will go directly from wet to dry. Because (with) intermediates, you don’t know, we don’t know where is the limit and we don’t know the tires.’

As big as a ‘gamble’ it was that the Spaniard took to run full race slicks on a wet track with simply a dry race line, Marquez showed us as much precision over his tire choice by racing within that sliver of a dry line. By the time the front runners eventually pitted for their bike swaps, Marquez was already turning in laps over five seconds quicker than anyone else. He would go on to take the lead back after twenty four laps, and proceeded to take the win nearly ten seconds ahead of the next finisher.

The whole of the MotoGP show now takes it summer break after this round, with some likely to be reluctant to enjoy the warm water of their beaches or lakes.

Save for Marquez and his team, who seemed to have long figured out how to turn water into champagne.