Recently, a Minneapolis couple posted a video of a rider (who is wearing shorts and sneakers) being taken out by a large rubber mat that falls from a boat that’s being towed by an SUV. 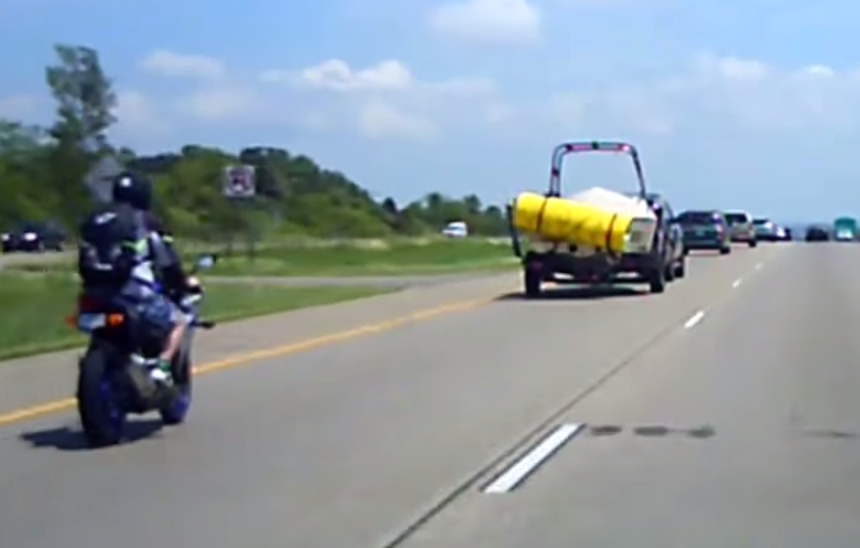 Cycle World’s Sean MacDonald (a writer whose work I’m rather fond of), took the opportunity not to criticize the rider, but to remind folks to always wear protective gear. We are not going to criticize the rider either. This accident was 100% the fault driver hauling the boat (and whatever knuckleheads helped him load it).   But that doesn’t mean the injury could not have been avoided if the rider was psychic.

Or just paranoid!!!!  So onto my soapbox…

Never, ever, ever, ride behind a an open truck that is loaded with stuff (tools, boxes, furniture, junk, etc), or an SUV with a mattress on the roof, or anyone hauling anything outside of, behind, or on top of their vehicle.

Yep. These accidents are often unavoidable. BUT… you can avoid many if you ALWAYS assume that the person who loaded it up was an idiot, and that the load will break loose, it’s just a matter of when.

Look, I’m not saying you shouldn’t ride with confidence.  But when it comes to expecting the unexpected, be a little paranoid out there. It could save your life.