“One side does look just a tad more used than the other, but otherwise they look even to me,” Mike told me.

Mike is one of Rob’s service technicians at Rob’s shop, rightfully his right-hand man whether Rob ever needed a right-hand man or not, so I pretty much trust Mike as much as I do Rob. I had called him over to look at the wear on my front tire, a Pirelli Diablo SC2 I use on the R1 for the track. I had already flipped it on the wheel once after my fourth or fifth trackday this year, in the hopes of keeping the wear even throughout the profile of the tire. I thought it was about time I flip it again just before my last trackday for this season, because I had hopes of setting an even faster personal best at Thunderhill Raceway (to no avail, after the fact).

Mike was right though. The wear between both intermediate edges of the front tire were indiscernible.

“Yeah. But that tad more rubber on the other side may just be a difference of half-a-second per lap out on track,” I jokingly replied. 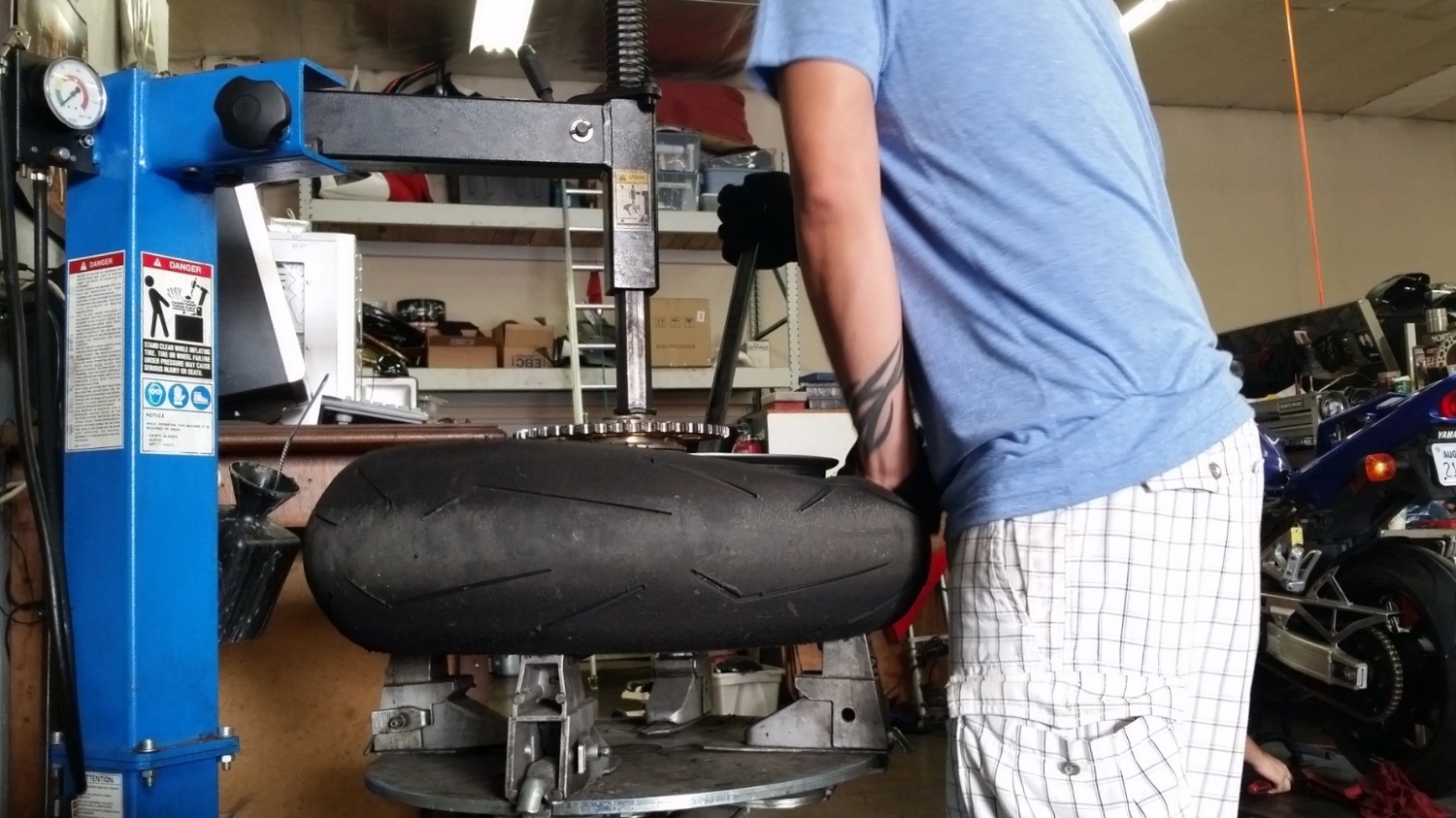 I don’t actually have a tire changer. I just have friends that do!

Flipping tires – or flipping the tire on the wheel to be specific – is not an uncommon practice for trackday enthusiasts. Not so much for racers even in the club racing scene, but really more for trackday riders looking to get the most life out of their track tires. Racers tend to not be bothered with this practice because they need all the grip they can get from their tires to be as competitive as they can during their races, so they make sure they have fresh rubber on reserve for when it matters. But if you’re just a regular trackday junkie, flipping the tires on the wheels allows you to keep the wear as even on the tires as you can through the season (or two).

Racetracks tend to go one of two ways – clockwise or counter-clockwise. Depending on which way and the layout of the circuit, you’ll find that racetracks have either more left-turning corners or right-turning corners; Thunderhill Raceway’s East (original) circuit that runs counter-clockwise has eleven left-handers out of its official total of fifteen corners, while Sonoma Raceway, which runs clockwise has nine right-handers out of its official total of eleven corners. So clearly, your tires tend to be more overworked on one side over the other, circuit-depending. Flipping the tires on the wheels then allows you to even them out as you return to the same circuits throughout the season. And when a set of track tires can run you past $350 per set, keeping the wear on both sides even goes a long way towards having to shell out this much money sooner than you need to.

They are. There is an arrow on the sidewall indicating which way to orient the tires on the wheels. For street tires this absolutely matters, as the tread pattern on tires are only effective at displacing moisture on the road if mounted correctly. But for track use, tire treads don’t really matter which way they’re oriented, assuming of course you won’t be riding on a wet or damp track.

Apart from extending the wear life on your tires, keeping the wear relatively even on both sides also gives you a more consistent degradation of grip through your progressing trackdays. As long as you don’t wait too long to flip your tires, so long that one side has already worn out a significant amount from the other, you can expect more life and even grip out of your already expensive track tires. 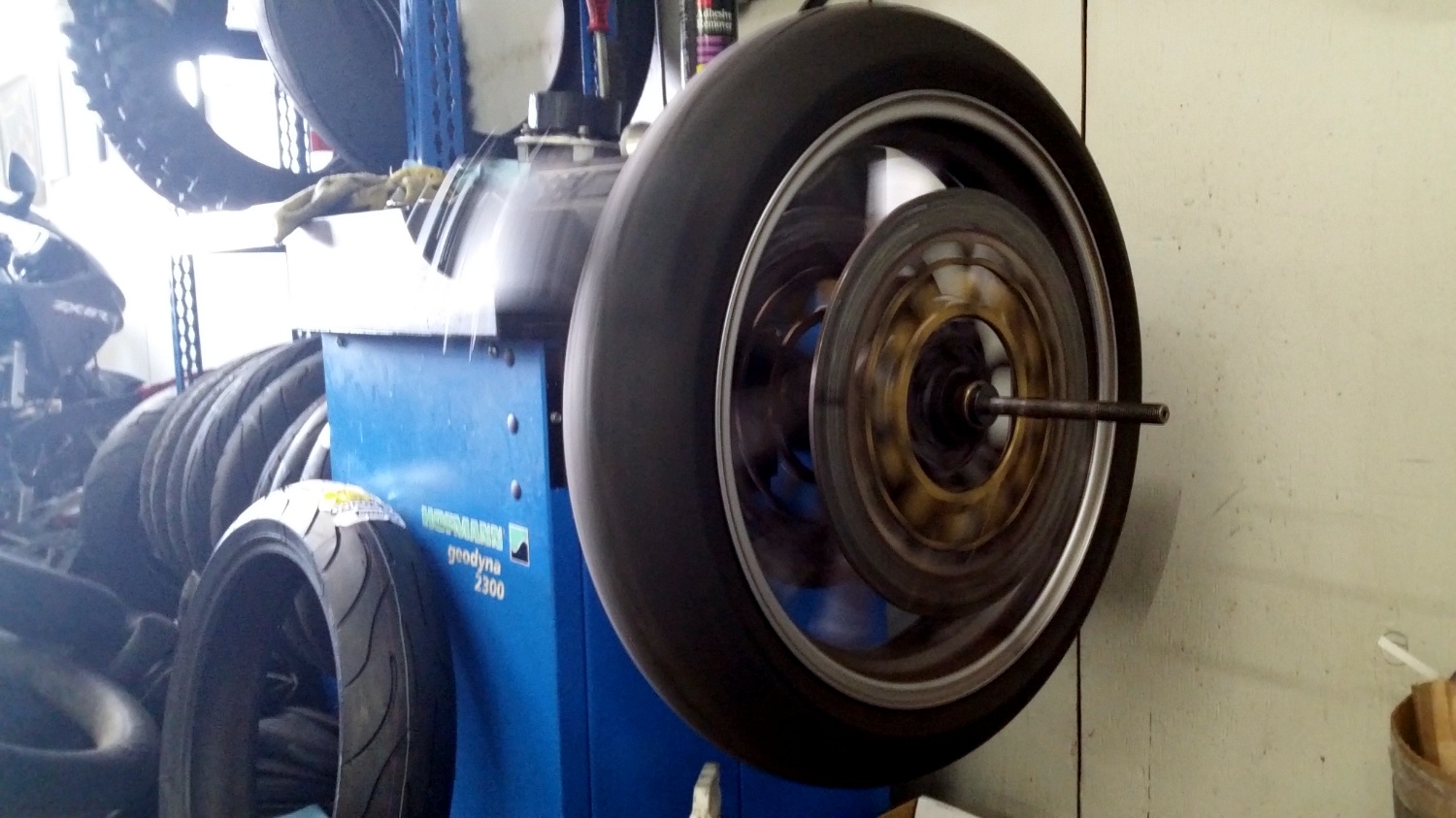 It’s all about balance.

A few years ago I was able to make a set of track tires last me a season or two, having just flipped the front and rear tire just once on each wheel. This year alone despite a late start to the season, I’ve already gone through two rear tires flipping each at least once maybe twice, and I’ve already flipped my front tire twice. Having gone faster than I have in previous years means I’m going through tires quicker than I ever have as well. So now more than ever, it’s more imperative that I keep up on the wear of my tires.

If you’re trackday junkie like me, getting the most bang for your buck goes a long way.

EDITOR’S NOTE:  It should be obvious, but this is a TRACK tip only, not intended for street use.  EVER.  And it’s a dry-weather tip only, as the writer made perfectly clear in his blog.  Also, use these money saving-tips at your own risk.  And if that’s not clear enough, how about this:  Riderzblog and its owners, partners, writers, affiliates, parents, siblings, and friends, provide no warranty or guarantee regarding the safety or wisdom of running your tires backwards.  Or any other trackside tip provided herein.  Myself?  I’d never run a tire backwards, but that’s just me.  Consult with your mechanic.  Always wear a helmet.  Etc. – sy