My bike has been down for a long time. After last November’s ‘car turned left in front of me’ incident, I’ve been scraping money together for parts and repairs. The first thing I bought was a new helmet. It has some WIFI dingus. I got it to talk to my phone, so I can play Pandora on the road through the helmet. Yesterday, it hit me how weird that is, when I noticed the helmet light was on. “Be right back, I have to go turn off my helmet.”  What a world we live in!

Then I had to save up to pay the shop for replacing the front forks I found on the internet. Just got the bike back last week, in time for a 3 day party called Eternal out in Jacumba.  The bike came back with a few problems I could handle. There was a gas leak dribbling out of the line by the fuel filter. I replaced that line and filter.  Problem solved. The oil leak was just a big dump of oil from the bike going down, slowly drooling its way through the engine with help from gravity. 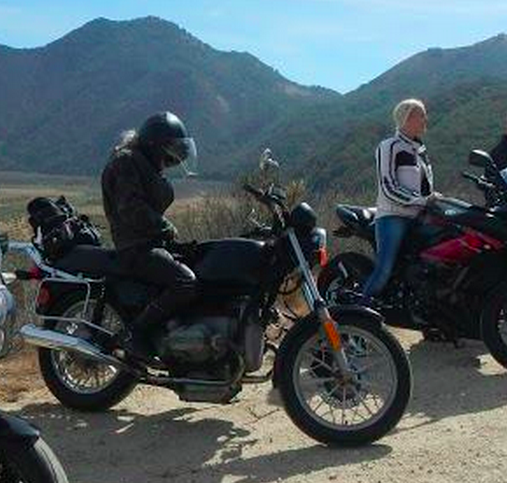 It wasn’t really an oil leak, just free-range oil running around in there. I need to wash my bike. I’d packed everything up on Friday morning to head out for a three day camping trip. My system is simple, I have a bug out bag for toiletries, and another one for electronics and “stuff.” Strapped on a pillow, bedroll, blanket and tent, added some water and snacks, and was ready to roll.

Stopped off at the gas station to tank up for about a 1.5 hour ride. As I removed the nozzle from the full tank, the bike suddenly shook and tipped towards the gas pump alarmingly. It leaned like a drunk sailor.  Upon inspection, the kickstand was loose. I wiggled it like a loose tooth, and it seemed willing to fall apart at any time.

A long time ago, I discovered the Airheads Beemer Club, a group for air-cooled boxer twins. At the first meeting I attended, I flew into the parking lot with style, deployed the kickstand, and fell over. The kickstand had fallen off! Way to make a great first impression, having guys lift your bike off you. For several weeks I had to lean it against stuff while I searched for an aftermarket stand that would suit me.

There are no trees in Jacumba, and I had no desire to try to prop up my bike in a bush or a chollas cactus, so I went home and unpacked the bike. I can’t hold up the bike and wrench on the stand by myself, so I called the BMW place and castigated them for missing this little detail. I took her down to the shop Saturday morning, and happily didn’t need a new kickstand. They were able to fix it with no problem and no charge, so that was nice.

I wound up spending the weekend working on the bike instead of having fun on it, but you have to do what needs to be done. Now I’m done, but the party’s over.

On the positive side, it was over 100 degrees out there and no shade. On the downside, I missed the big lasers they had, and music and dancing and staying up all night.

Next time. Oh hell yeah, next time I am going to Camp Like Khaddafi, with an epic tent to wallow in comfort. I think I’ll leave the braziers and dancing boys at home. Not enough room on the bike for all the luxuries.

Now it’s time to start painting again. This time, it’s gonna be incredible. I have airbrushes and I’m learning how to use them! Skulls and wolves and eagles and American flags…have I missed any cliches I should include? A reaper, perhaps, on a flaming horse?

All of that is more appropriate for a Harley than a BMW, but I have a BMW and can’t afford a Harley.

Editor’s Note:  I’m not sure that we have a blogger we love more than Barb.  (If you’ve met her, you probably get that.)  Also, there is not a blogger for whom we have a harder time deciding what “category” to label her blogs.   🙂