Last week, I got on my soap box and ranted a bit about freight and prep.  In case you missed it, the executive summary is this: grossly inflated freight-and-prep charges are the most effective and widely used tool of the dishonest motorcycle dealership.

I had a case last year where a young woman was hit by a left-turning Prius while she was on her brand new Yamaha R6.  The punk who hit her had a minimum insurance policy (which in California provides just $5,000 in property damage coverage).  Her bike sustained substantial damage, and the shop she took it considered it totaled.  No problem, she thought, I have full coverage.  Nope.  The motorcycle shop who sold her the bike  sent her out the door without comprehensive or collision.  Yikes.  But hey, mistakes happen.  What was troubling was that somehow she owed over $20,000 on the bike.  How is that possible when her R6 retails for under $11,000?  Even if she over-payed a little for freight and prep, after adding tax and tags, and even the extended waranty, it’s hard to understand how this motorcycle could cost much more than $16,000.  I asked the dealership how that went down.  They were unapologetic:

“Oh yeah,” the sales manager said to me.  “We pulled out the old baby-seal club on that one.”  Yikes again.

After some hard negotiating, they agreed to fix the motorcycle for $5,000 — the total amount of the property damage insurance available to my client.  A reasonable outcome for a terrible situation.  And not to brag, but she’s lucky she hired Riderz Law, where we actually give a ****, and are knowledgable and aggressive enough to find a solution.

Incidentally, I had bought two motorcycles from this dealership in the past fifteen years, most recently in 2013.  I won’t give their name here, but I will never buy from them again.  Hey — I believe that dealerships are allowed to make a profit.  But I don’t think lying to customers and taking advantage of new riders and young purchasers is the way to do it.

So what dealerships do I like southern California?  I’ll give you three.  And let me caveat this by saying, management can change, and I don’t know that these shops have never taken advantage of an uninformed consumer.  But from what I’ve seen, these three dealerships will give the informed consumer a fair deal. 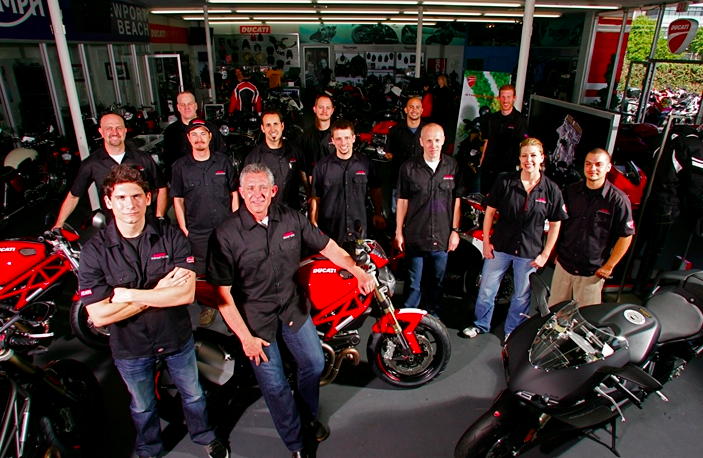 The team at Ducati Newport Beach

Simply put, we love these guys.  Located on Newport Boulevard, just a few blocks north of the Newport Beach Peninsula, this dealership specializes in Ducati and Triumph.  They offer a spacious showroom, a well-informed, enthusiastic and friendly staff, and low-pressure sales department.  And plenty of demo bikes.  That’s right . . . demo bikes.  They don’t act like you are crazy if you want to ride something before you buy it.  I’ve purchased two motorcycles from these folks in the past three years, and I plan to buy a whole lot more.  (Much to my wife’s dismay, I imagine.)  The best part is, I’ve never had to negotiate to get a good deal.

Visit them, and try these magic words:  “Hey guys, what’s the best price you can give me on a Ducati/Triumph ______.”

It’s always worked for me.

This is a new dealership that sells Yamaha and KTM, and it seems to me that they are trying to make a name for themselves with fair deals, and door-to-door delivery of your new motorcycle to just about anywhere in SoCal.  A few months ago, I came to the (inevitable) conclusion that I really needed a track bike, and after much deliberation, decided to go with a lightweight supersport.  (While I’m not trying to start  a debate on this particular subject, I wanted to go lightweight for three reasons: First, cost of ownership.  Second, I believe that without the crutch of massive hp and high tech, I will become a better track rider.  Lastly, I think I will be more likely to jump into racing if the bike’s top speed is 110 mph rather than 175 mph.  Time will tell if any or all of these rationales hold true, or if I just end up frustrated and buying a middle weight or liter bike in nine months.)  So considering all of the lightweights out there — and the segment is amazing right now, incidentally — I narrowed my choice down to the Yamaha R3 or the KTM RC390.  I chose the latter. (I will discuss why and how in a future post.)  Having finally decided on the KTM single, I looked around.  Other than sponsoring a young racer in the RC Cup, I’m not terribly familiar with KTM.  In fact, it’s one of the few major brands I’d never owned.  I didn’t have a go-to KTM dealer.  So first, I looked at the message boards and figured out the approximate best price I could expect in California.  Once I knew the price I wanted, I made a few phone calls.  The call to Palm Springs Motorsports was the quickest, and in fact, the last.

Sales Manager:  “I’ll beat any out the door price you’ve been quoted.”

Me:  “I’m not really looking to play that game, but I know what I’m willing to pay if we can make a deal right now.”

Sales Manager:  “Tell me your price.”

So there it is.  I don’t have a longstanding relationship with these folks yet, but I can tell you this:  Clearly, they are looking to build a reputation as a dealership that is worth the drive.  (Or at least a phone call!)  They aren’t paying the crazy Los Angeles overhead, and as a result, neither are their customers.  If you’re looking for a new Yamaha or KTM, give them a call.  Tell them Sy from Riderz Law sent you.

This mega-dealership in San Diego sells Honda, Kawasaki, Yamaha, and Suzuki, as well as Can Am and Sea Doo.  The place is huge.  And although I haven’t bought a motorcycle from these folks yet, but I fully intend to.  (I’ll update this blog accordingly when I do.)  My experience with these guys is rather funny.  I’d been told by a sales manager at another dealership that they are liars and that the prices they quote over the phone are not real.  After that conversation, I felt compelled to try my luck.  From what I’ve seen, that “warning” was nonsense.  I called, got a price on one of their bikes, and then went into the dealership in person.  I was given a no nonsense out-the-door price in writing, which included all fees and taxes.  The phone quote I received was accurate.

Their prices — at least on some models — are really, really good.  These guys move a lot of product, and they are willing to cut their profits pretty darn thin to do so.  If I had decided on a middleweight Japanese supersport, this is likely where I would have bought it.  In fact, when I spoke again to the manager at the other dealership about their alleged “fake phone prices,” and told him he was wrong, he made excuses about his shop having higher overhead, etc.  Ugh.

So if you are in the market for a new motorcycle, do yourself a favor and check out their weekly specials.  They have some deals that are hard to beat.  Be warned that the “sales price” that they show online doesn’t include freight, prep, taxes and fees.  But that is typical, and their final out the door prices, from what I’ve seen, are darn good.

Let me add:  I haven’t been paid to say nice things about any of these dealerships, and I have too much integrity to give the names of those places I don’t particularly like on this public forum.  But feel free to drop me a line — it’s: sy (at symbol) riderzlaw.com.  Share with us your experiences with dealerships in California — good, bad and ugly.  The input helps us give better advice when people ask.

Also, I’ll do a post in the next couple months about dealerships in Northern California that I’m particularly fond of.  And hey, if any of you owners or sales managers out there are reading this, you should know that I’m partial to European sports bikes these days, though I wouldn’t say no to anything track worthy.  Or even a nice cruiser.  In other words, I can be bought.