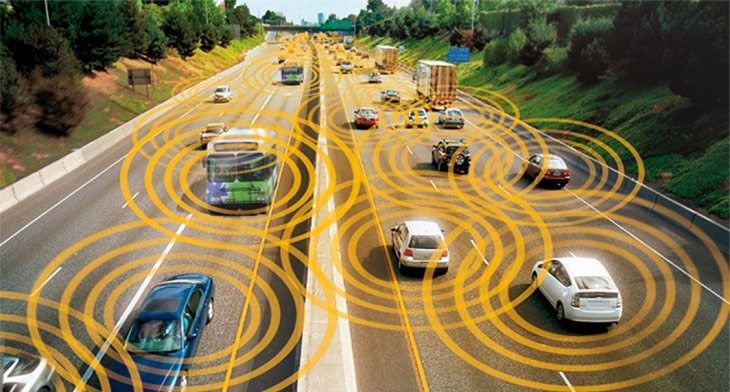 You probably have seen the ad on TV where the car automatically stops itself just inches in front of the announcer. Or another one where a car stops itself while backing out a driveway and saving the life of a kid on the sidewalk. I wondered when we would see these active safety systems on motorcycles and how they might work.

Radar can be added all around a car and I suppose all around a motorcycle too. The announcer was saved by a front-looking system that saw him and applied the brakes faster and more effectively that a driver could. We all take a fraction of a second to recognize a danger and then another fraction to actually do something. Only then will we begin to slow. A computer can recognize the danger and instantly react to begin slowing much faster than the best riders.

I think this would work well on a bike. Running into the back of a car or hitting a TV announcer would be no fun. I think maybe I would like to override the system and move to the side as a motorcycle is much smaller than a car and might fit into a space which would also avoid the collision. Front-looking systems also are used as smart cruise control. In addition to setting up at 65 MPH, it also can change speeds to match traffic.

Missing the kid on the sidewalk is less of an issue as most of us don’t have reverse gear and are instead walking the bike slowly in reverse. We also do not have a big cage blocking our vision. But the system could on the other hand identify a car coming too close from the rear. By working with the forward radar, such a system might automatically speed up the bike up a little, in conjunction with warning the rider and possibly flashing lights at the inattentive driver.

Side-facing radar systems are used to alert us to lane changes and to warn us of vehicles in our blind spots. Some of us lose concentration and weave to the next lane just like a driver might. We too have blind spots and another warning might save our bacon. Could such a system also react with the bike to lean it and turn away from an intruding car? Could we also have the flashing beacon to the side to wake up the driver? What if the system, based upon trajectories, could realize a side collision was imminent? Small air bags on the side might inflate before the collision and protect our legs.

Many car radar systems also flash warnings on the dashboard of a car. This might not work as well on a motorcycle. A car dashboard is only a few degrees below the line of sight through a windshield. The gauges on a motorcycle are far below the line of sight through our visor and over a windscreen. Maybe the alert could be posted on a holographic image that is actually in our line of sight? Such a projected image would be built into the motorcycle. The alternative would be to incorporate the image into a helmet but we change helmets more often than bikes and helmets are not required in many areas.

Active safety systems work by combining feedback from sensors and using it to control behavior of things like ABS braking, stability and speed. These systems are already used on many motorcycles today so the only thing lacking is the radar. So, Suzuki, Harley-Davidson, BMW, when will you start?