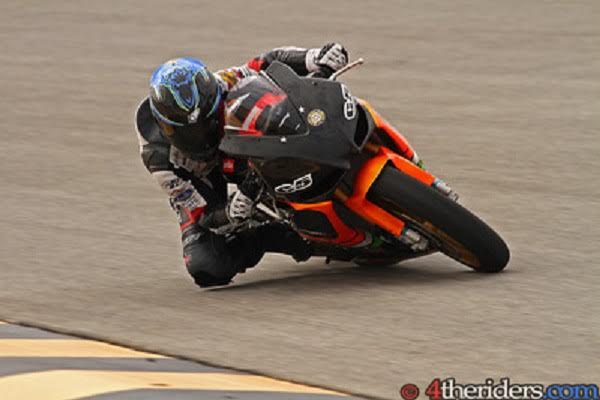 Following my previous post on the 5% rule (which applies to all motorcycle brake situations regardless of circumstances, location, or pace) the next piece that I have been able to start working on deals more with a track situation.

Historically, when braking was discussed, most instructors and coaches would be focused on where I started braking. Most of the advice was to “Brake Harder!” “Trail brake deaeper” “Brake harder, smoothly!” I didn’t find this extremely helpful – it is painfully obvious when you’re getting passed on the brakes, and anyone with any business on a motorcycle can figure out that the other person is probably braking harder than you are.

What an instructor never told me was to think about where I’m releasing that last 5% of the brakes, regardless of where I start braking. Ken and Nick on fastersafer.com go into this in a little more depth, but it was an eye opening revelation for me. I had never thought about where I was releasing my brakes beyond being happy with my speed. Thinking of a brake release marker and everything else up to there being dependent on all of the other factors was huge. Yes, have someplace where you are thinking about going to the motorcycle brakes, but the exact spot will vary widely based on your speed, bike and set up, traffic, line, and other variables (such as wind).

With an opportunity to start trying this on the track I realized that I had never really thought about this other than in a weak attempt to trail brake deeper – but never with a clear plan of “I will release the final 5% of my brakes HERE.” Since my first chance to practice this all was crammed into just a couple sessions, I made some, albeit minimal, progress. There were 3 corners where I solidly picked that point and got to really practice it. I chose 3 of the 4 corners at this particular track where I get passed the most frequently on the motorcycle brakes.

While one partial day of practice did not give me enough time to really establish this, it did give me a chance to begin putting it to the test. Thinking of my braking dependent on the end of it, instead of guessing where I should start depending on all of the factors mentioned above gave me a lot more confidence in beginning to work on my braking abilities. I was able to determine a specific spot where I wanted to conclude my trail braking, which allowed me to better determine where I wanted to begin braking, how hard I wanted to brake, and how to modulate the brakes in that other 90%.

Far from mastery at this point, but the confidence improvement is night and day. I no longer feel like braking is this mystery of “just do it harder and faster” but instead I have some very clear guidelines of what is involved, how to approach it, and thus how to improve it. For the first time since I started riding track I feel like I’ve started to scrape the surface on how to systematically improve braking rather than a “spray and pray” kind of philosophy.