Turns out, my last outing on the track was my last track outing for this season after all, as I was unable to attend our annual Z2 Trackday's Thanksgiving Weekend at Thunderhill Raceway. It was probably for the best, given that apart from the failing 2nd gear in my R1's transmission, my track tires on my R1 were completely done by the last trackday. I had hoped to babysit my tires during that event to be able to continue to use them for our Thanksgiving event, but I was unable to. For those reasons combined with family duties during the holidays, I felt it best to simply sit our Thanksgiving event out. 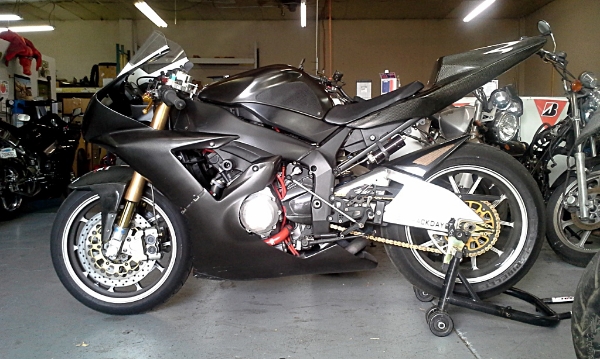 At my friend Rob's shop for the winter.

So preemptively wrapping up my track season meant that I could be preemptive in my winter project for the R1, tackling my 2nd gear woes in the transmission to get the bike back up to full speed for 2015. Though the bike will be at Rob's shop for the winter, the plan is for me to work on it myself every Saturday, time and parental duties permitting (you know, two kids and all).

The way the R1 is put together, getting to the transmission means having to remove the engine from the frame, which is something I've never done myself on the bike. And since the engine will be off and out of the frame, I'd like to check the rest of the internal components as I could, and freshen up what could use some refreshing. I have no grand plans of souping up the bike so to speak, but with over 60,000 miles in the original internal components, I'm sure the bike would benefit significantly from some polishing and/or fresh bits here and there, giving it a fresh breath of life. 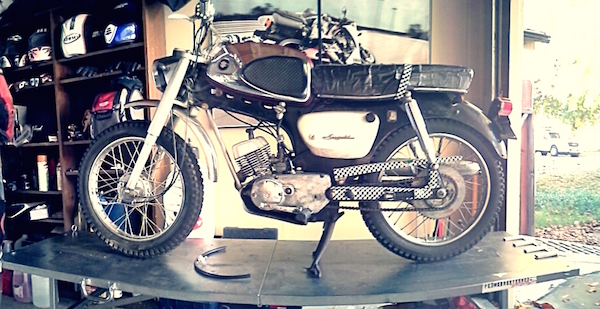 My project at home, well, as far as I can do myself anyway.

And with the R1 out of my garage for the next month or two, I have the room to put my vintage Suzuki on my work table, and see how much of the shifting problem I am currently having on it I can tackle on my own.

My plan is to start simple; check the clutch cable end in the engine case, then maybe move to the clutch assembly itself, then perhaps to the transmission if necessary. I’m a bit encouraged to tackle this myself after disassembling my art bike and putting my fear of breaking-something-just-because-I-opened-it-up aside, paired with the notion that two-stroke engines tend to be simpler than four-stroke engines, relatively speaking.

Still, I'll admit to a bit of reluctance because I’ve never worked on a two-stroke engine, and just because of the bike's sheer age. Simply put, I'm a bit afraid of how delicate the bike might be.

But you know what, as much as I don't mind and love just kick-starting the bike in my driveway to listen to that two-stroke noise, I just can't wait to get back to scooting around town on this little scoot. So my anxiousness far outweighs my reluctance at this point.

I just hope I don't give myself more anxiety during this project.