Since taking the bike home, I had been riding it to get familiar with the overall characteristic of the bike. Prior to this, my only other experience with a two-stroke motorcycle is a single-speed pocket bike I had last year, which I briefly used as a pit bike. Just the same, I also wanted to get a feel for using drum brakes exclusively, as that's all the bike has front and back, and I've not owned a bike that didn't have at least one disc brake on it.

Each time I would take the bike out, I would incrementally increase the distance I would go to ride, as well as the top speed I would ride it at, just to stretch its legs and see how it fares under such loads. The previous owner strictly used it in town, and not frequently at that. He said a few times he would dare to, he'd take it somewhere to really stretch it out, but this was very seldom.

The bike is very eager, starting up with relative ease regardless of this cooling part of the year. Even despite parking it in the side of my house (under a cover), it doesn't take much for it to fire up with a kick or two. Another pleasant surprise is its fueling; the previous owner lived in a town well above sea level, so he had advised me that the only way for the bike to idle is to keep the choke on. Turns out, the fueling just didn't like the thinner air at higher altitudes, because bringing it down to where I live it idles just fine without the choke.

Riding it though is definitely an experience. There's a wobble at the front wheel, nothing too alarming but it's there, and it's more visible than discernible really. The drum brakes are teaching me to not brake like I do on my regular motorcycles; I need to give the bike the time and distance to actually stop the bike, especially as I pick up the speed. On top of that, I DEFINITELY need to be using the rear brake, which is something I don't do on my regular motorcycles. But this bike needs all the braking it can get to slow it to a stop. Throttle modulation is also different, mainly when taking off in first gear at a stop. Not sure if it's a fueling characteristic or the two-stroke engine, which I've read to be peakier than four-stroke cycle engines. The latter seems to make sense to me since I feel I have to be revving the bike up in first gear before I slide the clutch lever out to get the bike moving forward. Sometimes I have to play with the throttle as I slowly ease the clutch lever out, just so the bike doesn't bog to a stall. So basically, the bike is a bit of an excitement to ride! 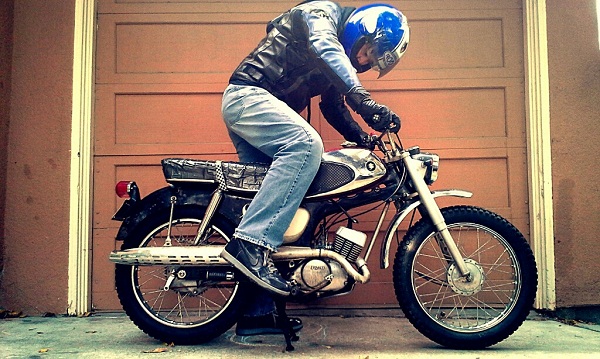 Unfortunately, I'm going to have to wrench on the bike a lot sooner than I would've wanted.

During the last ride I was doing on it on my way back to my house, I couldn't get the bike into gear after coasting to a stop sign and putting the bike in Neutral. Pressing down or up on the clutch pedal would move the pedal, but not actually engage a gear. I was only a block away from home, so I turned off the bike to walk it home. The bike is so light, it feels like pushing a slightly heavier bicycle around. However, after a few yards, I wanted to see if it still had the problem. I started it up, clicked it into gear, and off I went. Rode it home the rest of the way, but once I got to my driveway and shifted the bike into neutral, again I couldn't get it in gear. I thought maybe it didn't like the prolonged heat, that perhaps the oil in the gearbox could use some changing. I parked the bike for the rest of that day.

The next day, having cooled off overnight, I started the bike up and tried to get it in gear. I was still unable to though, so clearly the operating temperature had nothing to do with it. Pulling the clutch lever in, I could see it actuating the shaft in the case, so I adjusted the clutch lever to take away as much of the play as possible, but this did not affect the problem.

I've resigned on the idea that the problem could lie in the clutch assembly itself. So I'm going to have crack the cases open to get a much better look and figure it out. I suppose I could be irritated that I'm having to do this so soon since taking ownership of the bike. But then I just remind myself that the bike is nearly 50 years old. It may just be a case of the bike finally needing some care and attention.

But hell, I'm up for giving some!