Had the chance to get deeper into the engine to troubleshoot the bike’s shifting woes. I had my friend Rob have a look at both sides of the engine with the case covers off, and nothing seemed amiss to him on either. He then removed the clutch basket, then tried to shift the gears by hand, just to watch the linkages that actuates the shift drum. He managed to get the transmission out of Neutral and into 1st gear, then shifted all the way up to 4th gear. However, in playing with the gears a bit more for observation, we found that in between other gears, the transmission would get stuck in gear again, not just in Neutral. We would move the linkages, but the shift drum won’t turn.

So we ended up splitting the cases after all to have a look in the transmission itself. 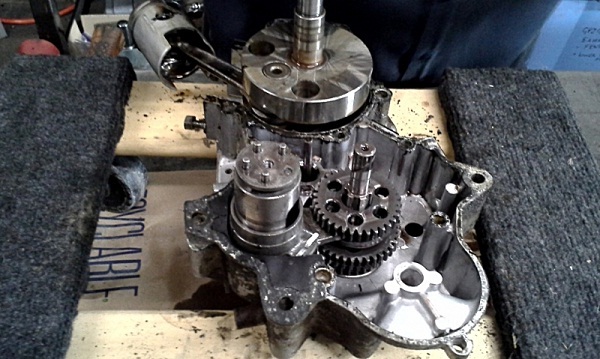 Shift drum is the upright cylinder to the left, with the four prongs on its face. The linkages (not pictured) grab the prongs to turn the drum when going through the gears.

Again, we did some visual inspection, but apart from some grime on the bottom of the cases that weren’t worrisome, nothing just jumped out as the suspect. So the next thing Rob did was pull apart every individual component of the transmission out of the case, laying them out in relative order on a shop towel, for individual inspection of each component. 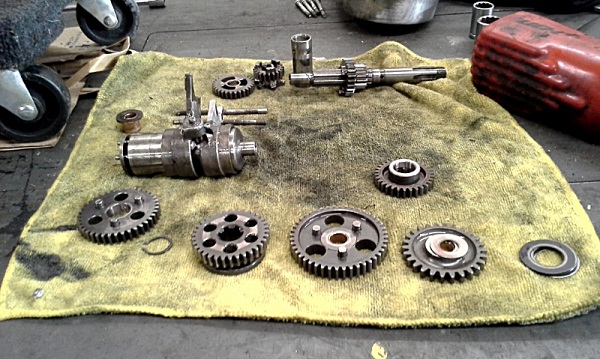 I have full faith in Rob that he knows the order in which to put the parts back together during reassembly, cause I don’t!

Individual components inspected, and we still found nothing that could cause the shifting problem! Both shift forks didn’t look bent, and in fact, looked pretty beefy to be subject to bending anyway. Save for some wear as to be expected, nothing seemed a prime suspect for the shifting problem.

Puzzled, we settled on perhaps giving every part a thorough cleaning before putting them back together. Maybe that will help, maybe it won’t, but with everything already apart, a little cleaning definitely won’t help. Before we could do, we bagged every assembled component until we can get around to putting them back together, which won’t be until after I source new gaskets for the cases.

Maybe during the wait, something will click in either Rob’s or my head over something we may have overlooked.