“So I simply made him pick the poison, and then taught him not to use it on himself.” – Part IV

I put a new rider on a liter bike.

This was my experiment all along. I was a mad scientist that introduced a volatile accelerator to an unproven element hoping they would yield a compound that wouldn’t violently blow up in my face.

And fortunately, it did not.

(Images courtesy of GotBlueMilk.com)
Now, two to three years of the work we did to keep Jairo and his liter bike rubber-side up would simply yield too many words to cram into this entry. So instead, I’ll boil it down to a single principle that I believe was the crux of Jairo’s entire learning curve.

This principle is what I would echo every time I reminded Jairo of the formidability of his liter bike, or when I would remind him at the start of his trackdays to ride for his next one. It was this principle that I would ingrain in him whenever I would tell him that though his bike was completely dependent on him, he is never its master, and that he is at the mercy of his own machine. That his machine would not do anything less than exactly what he makes it do – for better or worse – is why I would never let him forget this singular principle to anchor everything he knows about riding his liter bike from day one, and even up to now:

I didn’t teach him to fear his motorcycle – I taught him to respect it.

For him to respect his machine was not to fear it, but to understand what it is capable of so he does not demand anything from it that he couldn’t control at any given time. Respecting his liter bike is what I believe has not only allowed him to stay safe, whole, and alive, but to continue to thrive. Never forgetting to respect his motorcycle during every ride is how he was able to get to the level of where he is now a lot quicker than I did when I started out. 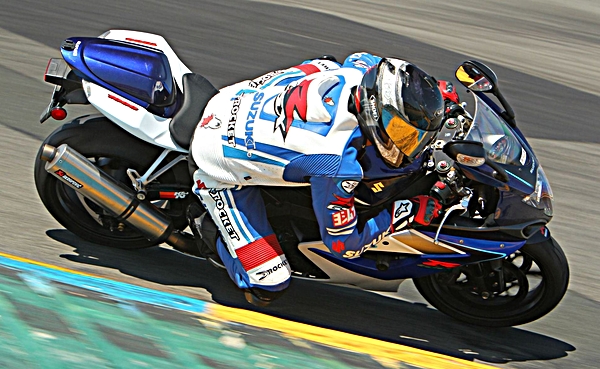 Respect takes you places that fear will not.
(Image courtesy of GotBlueMilk.com)

And with that singular principle right in the core of his ongoing learning experience anchoring everything he does on his motorcycle, Jairo exceeded all expectations. Before he even knew it, other riders who have been riding longer than him would come to him not just to pat him on the back for his riding prowess, but to ride with him in hopes of learning a thing or two. Even I have been surprised at how far he’s come in a very short amount of riding time. And this remains true even to this day.

So experiment concluded, and the goal exceeded. Does this then mean that the almighty EX250 isn’t a beginner rider’s only best choice after all?

No, it doesn’t, nor does it mean that a high-performance liter bike should automatically spell doom for a beginner rider. I didn’t really set out to denounce the status of low-displacement motorcycles like the EX250 as most appropriate for beginner riders, but rather to simply answer this question that I started with:

What makes a bike the best beginner bike?

The rider that respects it.