Question: What were the events of your accident?

Dale: I was riding from LA to Irvine, southbound down the 405. I was already in the carpool lane…traffic would fully stop and go, stop and go, so I felt relatively safe that no one would dart out for a random lane change. I was very alert and aware going 35-40 mph constantly scanning for cars showing impatience…All of sudden, a bronze car about 6 cars ahead of me on the lane to my right, opens his door. There was no way I was going to stop in time. I immediately broke and had to make a choice to either hit the open door or hope to God an opening would come up in the carpool lane. Not to be cliché, but it happened really fast. I avoided the door but there wasn’t that much room to maneuver so I ended up laying the bike down and went flying onto the back of an Audi

Question: What happened right after the accident?

Dale: Right after I hit the ground, it took a bit of time for me to process what had just happened. I stayed down. My torso and left arm took a lot of the impact, so you could imagine I was in quite some pain. I think what kept me down too was the fact that I was carrying a 25 pound backpack with a passenger helmet (I think that broke my fall as well). I saw my bike on its left side, nose fender and wind shield shattered. The Audi had visible scratches, but I couldn’t see much. The first person to come to me was a lady. She told me her husband was an (off duty) fire fighter and he was calling it in. He came to me shortly and asked me my name and if I knew what had happened. I responded, “my name is Dale and someone just opened their door on me.” He said not to move and help is on its way. Fire fighters were on scene first followed by the paramedics and a chp officer. I kept asking about the bronze car and they told me that there was no bronze car in site. I was pissed. They then asked me a lot of questions, like my name, age, “do you know where you are.” They checked my reflexes and immobilized me on the orange board. They asked if I wanted to go to the hospital (which was interesting to me). I said yes, better to be safe than sorry so they hoisted me up and put me in the ambulance. In the ambulance, a chp officer took my statement and filed a report. She gave me a card and told me to call it because they were taking my bike somewhere and to ask about the police report. 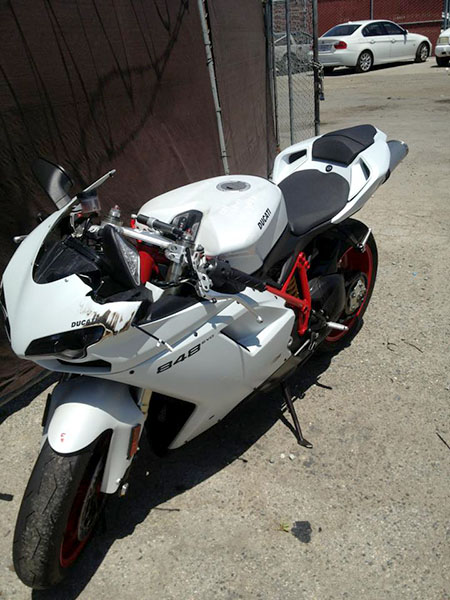 Question: What were you riding, how long have you owned it?

Dale: I bought the bike in March and my accident was late July, so I have been riding for barely 6 months. This was my infamous first accident/drop. I feel very lucky that I was able to walk away from it with just a concussion and a couple bruised ribs.

Question: Did you go to the hospital?

Dale: Yes, I was taken to the hospital. There was a doctor that immediately assessed me and deemed me “not urgent.” They checked my vitals again, hooked me up to all their instruments and monitored me for a concussion and prepped me for a CT scan. Since I was not urgent, I had a lot of waiting time and kept getting pushed down the list. I was just happy I was in one piece. There were a lot of other people there in BAD conditions. I eventually left around midnight.

Question: Have you fully recovered?

Dale: I would say I am fully recovered by now (2 weeks later). I still have neck pain, that I’m seeing will go away with time. The injuries I sustained were a concussion, 3 bruised ribs and a couple scratches. I was only wearing a helmet, tank top, jeans, tennis shoes and a back pack. Right??! So lucky to walk away.

Question: What is the outlook on compensation?

Dale: My medical fees I expect to be fully reimbursed by my health insurance. My bike, I am paying out of pocket. I do not have collision on my motorcycle insurance because I was waiting for August to get a package with my bike and car together (my car is with AAA and my bike is Statefarm). My accident was July 28. So close to August! I got quoted for 3g’s for repairs to my bike. I’m going to have to swallow that; I’m ok with that. Statefarm has been very helpful with my accident and handling my claim. Currently we are waiting for the police report and will contact me when something comes up.

Will you keep your bike or salvage it?

Dale: Right now, I want to keep my bike. My parents of course are demanding I “get rid of it.” If I sell it, I’ll end up getting another one, but I feel like I have bonded with the bike now that we survived a crash. I know I can’t be this lucky all the time, but I really do enjoy riding (I can’t explain that).

Question: How have the police been throughout the ordeal?

Dale: The police have been more or less nonexistent. They filed their report and paperwork and I’m assuming they're doing everything they can do in finding the bronze car. I hope at least one witness said something about that. That would help me out a lot in terms of insurance and my claim.

Question: Have you taken an MSF course and if so, did anything you learned help with your accident?

Dale: I did take a safety course. I took the one they offer at Saddleback Community College. They have this exercise where you have to make an emergency stop. I guess that helped, but it’s so different when you’re in actual traffic and your bike is way more than 250cc’s.

Question: How supportive have friends and family been?

Dale: My immediate family is very discouraging about keeping the bike. It’s kind of annoying to be honest, but I understand where they are coming from. They don’t want to see their son, nephew or brother in that situation again. My friends are more supportive saying “get back on that horse” or “glad you’re alright Dale…if you keep the bike, be careful.” They’re not like “SELL THE BIKE, YOU ALMOST DIED” like my family is. One of my close friends drove down from LA to help me transport my bike to the shop in Irvine; I am so thankful for her. 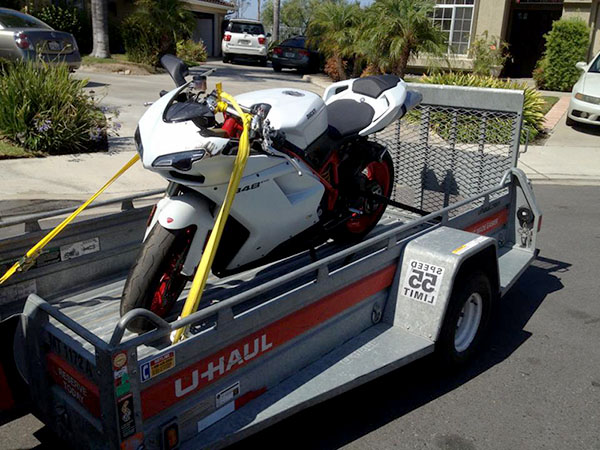 Question: Any last thoughts on the accident?

Dale: My thoughts of the incident: Brembo makes a great product, that bronze car better be found and I consider myself one of the luckiest people on earth. I was wearing a tank top and walked away from a motorcycle accident. Oh, ya I’ll be wearing my jacket at all times now. That was a ridiculous decision not to. My advice for other riders: ride within your skill level. Don’t split lanes if you’re not comfortable with it and if you see other people splitting lanes with ease, don’t feel pressured or inferior that you’re not doing the same. I’d rather spend the time in traffic then the time in the hospital. I kind of want to go say, take your bike tracking. I track my car and that’s where I learned how it handles in the most extreme conditions. I guess what I’m saying is learn and know your bike. How it handles, brakes etc.