It has recently come to the attention of the motorcycle accident lawyers at Riderz Law that a number of bikers — specifically patch holders — have been arrested for carrying decorative motorcycle leashes, sometimes called “getbacks whips” or “getbacks.”  The leashes are made of braided leather, often in club colors.  At the end of each leash is a metal clip, substantially similar to what one would find on the end of a big dog’s leash.  Typically, they are attached to a motorcycle’s handlebars for decorative purposes. 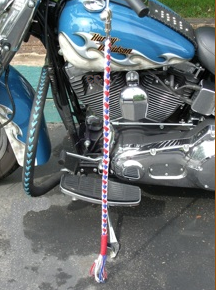 Recently, in various parts of the state of California, including Ventura County, Orange County, Riverside County, Los Angeles County, and throughout Northern California, LEOs (law enforcement officers) have been arresting those people who have them attached to their handlebars, and charging them with violation of California Penal Code section 12020(a).  The statute makes it unlawful to (among other things) possess a wide variety of weapons.  This list of “weapons” includes a number of items that may be everyday objects modified to be used as weapons.

In relevant part, the statute reads,

“Any person in this state who does any of the following is punishable by imprisonment in a county jail not exceeding one year or in the state prison:

1. Manufactures or . . . gives, lends, or possesses . . . any instrument or weapon of the kind commonly known as a blackjack, slungshot, billy, sandclub, sap, or sandbag.”

Based upon a review of the relevant case law, it is apparent that this statute, PC 12020(a) is being applied here by categorizing the decorative leashes as “slungshots.”  The California Court of Appeals decision of People v. Fannin is on point.  In Fannin, the defendant was arrested and charged under PC 12020(a) for carrying a “slungshot” – in that case, a “two-foot length of metal chain, with a heavy padlock attached to one end.”  ( People v. Fannin (2001) 91 Cal.App. 4th 1399, 1401.)  The defendant challenged the statute as unconstitutionally vague and over broad.  The court upheld the constitutionality of the statute, but provided informative definitions, and crucial specificity to its enforcement, which could greatly assist in the defense of such a charge. 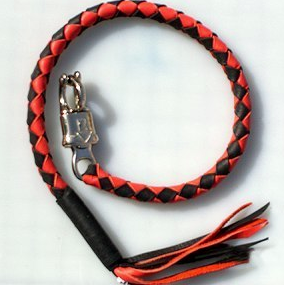 In upholding the constitutionality of the statute, both generally and as applied to Fannin, the court offered a definition of the word slungshot.  “California case law provides a clear definition of slungshot: ‘a small mass of metal or stone fixed on a flexible handle, strap, or the like, used as a weapon.”  ( People v. Fannin (2001) 91 Cal.App. 4th 1399, 1401-02, citing People v. Williams (1929) 100 Cal.App.149, emphasis added.)

It would appear that this definition could reasonably be applied to the decorative leashes at issue here.  Specifically, the leashes are a small mass of metal (the metal clip) on a flexible handle or strap (the leather strap).

However, Fannin provides language that may be crucial in defending a charge of PC 12020(a) for possession of a decorative motorcycle leash.  The Fannin Court examined several cases wherein the defendants were charged with carrying objects that were obviously designed to be used as weapons, such as “56 one-inch metal washers, strung on rawhide . . . , knotted to hold the washers together and form a seven-and-a-half-inch handle that could be looped around the wrist.”  In those circumstances, mere possession was enough to support a conviction under the statute.

However, the Court acknowledged that many legal, everyday items, such as a bicycle lock or table leg, could fall within the scope of the statute.  As such, the government may look too suspicious circumstances to prove that such an item was intended to be used as a weapon.

The Court explains, “The Legislature here sought to outlaw the classic instruments of violence and their homemade equivalents; the Legislature sought likewise to outlaw possession of the sometimes-useful object when the attendant circumstances, including the time, place, destination of the possessor, the alteration of the object from standard form, and other relevant facts indicated that the possessor would use the object for a dangerous, not harmless, purpose.”  (Id. at 1403, citing People v. Grubb (1965) 63 Cal.2d 614.)

The Court continues, however, to explain that intent to use such an object as a weapon is not vital to a conviction under the statute.   “Intent to use a weapon is not an element of the crime of weapon possession. [Citations.]  However, if the object is not a weapon per se, but an instrument with ordinary innocent uses, the prosecution must prove that the object was possessed as a weapon.  The only way to meet that burden is by evidence indicating that the possessor would use the object for a dangerous, not harmless, purpose.”  ( Id. at 1404, citations omitted; emphasis in original.)

The Court continues, “The evidence may be circumstantial, and may be rebutted by the defendant with evidence of ‘innocent usage.’ [. . .]  Intended use is not an element of weapon possession, but the prosecution always bears the burden of proving that the defendant possessed a weapon.”  (Id., citations omitted.)

In Fannin, discussed in Friday (Part 1) and Saturday’s (Part 2) blog entries, the prosecution met this burden by the admission of the defendant – there, the defendant told the police that he carried the metal chain “for protection.”  As always, it is imperative that NO ADMISSION be made to law enforcement.  A seemingly innocuous statement such as “it’s for self-defense” could all but seal the fate of a motorcyclist who is in possession of these decorative items.  (Check out this page on what to do if you’re stopped by a cop, and our Stopped By a Cop “Do’s and Dont’s.”)

In summary, the Court offered the following:  “[A] slungshot is a striking weapon consisting of a heavy weight [made of metal or rock] attached to a flexible handle.  An ordinary object such as a bicycle lock . . . may be a slungshot.  The prosecution bears the burden of proving the defendant possessed such an object as a weapon.  The prosecution may meet that burden with circumstantial evidence, or with the defendant’s statements explaining why he carried the object.  On the other hand, the defendant may present evidence that he possessed the object innocently, for the purposes served by its legitimate design instead of those proscribed by Penal Code section 12020.”  (People v. Fannin (2001) 91 Cal.App. 4th 1399, 1406.)

Recently, I spoke to one of the manufacturers of these decorative leashes, Ms. Bonnie Collins of Cactus Leathers.  Bonnie is a member of the Graveyard Gamblers MC and a member of the San Diego Confederation of Clubs.  Bonnie advised me that she is aware of recent police harassment with regard to her leashes, and has advised purchasers of her products that they “zip tie” them to their bikes.  This advice has a logical appeal, as it would make the leash very difficult to remove from a bike, rendering it nearly worthless as a “potential weapon.”  It should be noted, though, that no information is yet available as to what reaction this will get from law enforcement (i.e., whether they would still file charges for violation of the statute), or how effective its use would be in criminal defense.

We hope this information is helpful to our biker brothers and sisters.  If you run into problems with LEOs on this subject or would like to keep us informed of any biker discrimination you’ve run into, feel free to contact the motorcycle accident lawyers at Riderz Law by calling us or shooting us an email.  And as always, ride safe.