It should come as no surprise that California leads the country in motorcycle thefts.  We have more thefts (and motorcycle accidents, more motorcycle fatalities, etc.) because we have more riders and more registered motorcycles than any other state. But there is more to these numbers than that.  Motorcycle theft is big business these days in the Golden State.  And the further south one goes, the higher the rate of motorcycle theft.  San Diego County has as many thefts annually as Los Angeles County, despite having just one-third the population.

Almost 80% of the sportbikes in the San Diego area are never recovered.  (State-wide and motorcycle wide, the number is closer to 50%.)  Last yeast alone, more than eleven-hundred sportbikes were stolen in San Diego County.  According to the insurance industry, the cost of a stolen motorcycle averages around $9,000 per claim. During the first 10 months of this year, more than 5,000 bikes were stolen in California.  That translates to about $45 million in insurance claims this year alone.  Naturally, these costs are passed on to all of us in the form of higher rates.

What makes matters worse is that motorcycle thefts are not high priority for law enforcement.  The budgets for such enforcement are limited.  There is a (very small) glimmer of what we hope is good news on the horizon, however.

Beginning January 1, 2011, a law will be enacted that will make theft devices known as “pigtails” illegal.  Pigtails (shown below) are simple, innocuous-looking devices that act as a secondary ignition system, allowing thieves to quickly circumvent your key ignition, often in as little as twenty seconds.  Moments later, someone else is riding off on your beloved R6, CBR, GSXR, or whatever you ride. 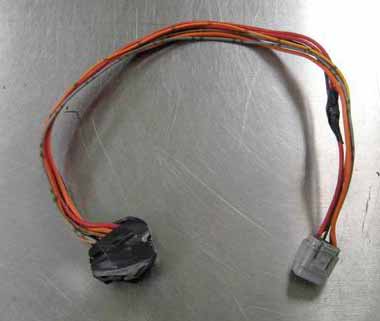 The state bill, AB 1848, authored by Assemblyman Martin Garrick (Republican from the 74th district), will amend the California Code to make possession of these devices illegal.  California Penal Code section 466.65 will provide that “Every person who possesses . . . any device designed to bypass the factory-installed ignition of a motorcycle in order to start the engine of a motorcycle without a manufacturer’s key . . . is guilty of a misdemeanor.”  Violators will face up to six months in jail and fines up to $1,000.

We hope this is a small step forward in the war on bike theft.  How this law will be enforced, if at all, remains to be seen, of course.  Police departments may take little notice of the new law.

BIKERS BEWARE:  Worse than disregarding the new law, we fear abuses from LEO’s trying to railroad law-abiding bikers in possession of some simple bike tools. Section (b) of the new law will make it illegal for any person to possess tools such as wire strippers, bolt cutters, or electrical tape, with the intent to steal a motorcycle.  I know that on long rides, I carry a small toolkit that includes, among other things, electrical tape. Of course, to be in violation of the law, you must have the intent to steal a bike.  But I’ve heard of worse cases of police abuse than taking liberties on such a broadly-drafted law.  Particularly against those of you who hold patches.  But you know us lawyers are paid to be paranoid. More on that another day.

So, just as we advise that the best way to avoid a motorcycle accident is to get proper training and stay attentive on the road, we would advise our readers not to depend too much on law enforcement to protect your beloved motorcycle.  Always use your steering column lock.  Park your bike where you can keep an eye one it.  If possible, keep it in a locked, private garage.  Remember that the money you get from your insurance company will not replace sentimental value, and in many cases won’t be enough to replace your motorcycle, or even pay off what you owe.  And as lawyers, we feel that we should caution you about the tools you carry, particularly if you happen to belong to a group or club that the LEOs don’t have too much love for.  But, as I’ve said, we get paid to be paranoid.

As always, ride safe, and stay sunny-side up.