This topic may seem irrelevant on this very rainy Wednesday in December, as my motorcycle sits hidden away in my garage in Pasadena. I didn’t want to be on the road at all today, much less jump on the bike. Even in my more daring, much younger days, when I argued that, “hey, that’s why God invented rain suits,” I still avoided lane-splitting on a day like this. Nonetheless, I anticipate a dozen or more blog entries on this topic in 2011, so I thought I might as well get a jump on it. Consider this an introduction on the topic, with more to come in future posts about the safety issues, legality, and ongoing debate about lane-splitting.

When I was in law school, I rode my motorcycle every day, rain or shine, through the heavy San Francisco traffic. For the rest of the past decade, I’ve ridden it just about every day to work, whether that commute was through five miles of Orange County traffic, or a horrific twenty-five-mile commute through downtown Los Angeles. Thankfully, these days I live just three short miles from my office. But regardless of the distance, I would rarely shy away from lane splitting. After all, who likes sitting, roasting in the hot sun, bored to death, waiting to move two car lengths every five minutes? Especially when there’s a wide-open lane, just inviting my motorcycle to get going.

I will admit it again: Yes, despite my constant work with injured motorcyclists, I am a lane splitter. “Lane splitting,” also known as “lane sharing” or “white lining,” is the practice of riding between rows of traffic. Although illegal in most states, it is legal in California,* and most of the rest of the world. Now honestly, I don’t recommend it. But I still do it. In fact, I don’t recommend riding a motorcycle in heavy Los Angeles or San Francisco or San Diego traffic EVER, especially if you are inexperienced as a rider. But . . . I do it.

The practice of lane splitting is much maligned as dangerous, crazy, irresponsible, unfair, etc. Many a cager (aka car driver) feels that “if we have to wait in traffic, motorcyclists should, too.” This, of course, is a silly argument against it. But if it really is that dangerous, maybe it should be illegal, right? As a motorcycle accident attorney, I have encountered surprisingly few motorcycle accidents that were the result of a lane-splitting biker. And in each of those cases, other factors were also involved, such as alcohol or excessive speed. In fact, I would be very much surprised if sitting in stop-and-go traffic was any safer than (slowly and carefully) riding between lanes. Plenty of motorcycle accidents have happened to bikers who were just sitting at traffic lights or waiting in a line of cars.

In fact, according to the SF Gate, a USC study commissioned by the U.S. Department of Transportation concluded that lane splitting is actually safer than sitting in stop-and-go traffic, where bikers are far more likely to be “sandwiched” between two cars.

“For a motorcyclist, that’s the safest place to be,” Professor Harry Hurt said shortly after releasing his study. “A lot of people think it’s a hazard, but the cold, hard facts are that it’s not.”

I will continue to lane split as long as it’s legal in California. But I never do so when traffic is moving at high speeds. And I never do so at more than 10-15 miles faster than the flow of traffic. The truth is, we all know that riding a motorcycle comes with inherent dangers. But those dangers can be decreased with appropriate safety precautions. Depending on traffic conditions and a rider’s experience and skill level, one such precaution may be to avoid lane splitting altogether.

There are tons of drivers out there who don’t see us. Either because they are texting, fiddling with their radio, talking on their phone, or otherwise not paying attention. If we’re riding between lanes, faster than the flow of traffic, it’s no different. Whether we choose to lane split or not, we need to take precautions to ride safely, and within our skill level. 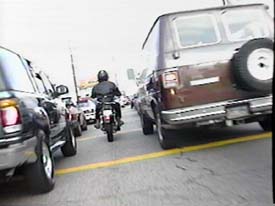 According to CHP’s website, “Lane splitting by motorcycles is permissible but must be done in a safe and prudent manner.”

Is it Legal to Ride Between Lanes on a Motorcycle in California?

In fact, the only “official” document I could find on the issue is from the California Highway Patrol.  According to their Frequently Asked Questions page on their website, lane-splitting is legal.  The site states:

Q:  Can motorcycle riders “split” lanes and ride between other vehicles?
A:  Lane splitting by motorcycles is permissible but must be done in a safe and prudent manner.

Motorcycle cops routinely lane split, and it’s common to see motorcyclists do it as well.  And, according to the CHP, it’s legal.  That said, I am aware of motorcyclists occasionally being given tickets for doing it.  (The ticket is invariably for “Unsafe Lane Change.”)  If you get one, please contact us.  We like to keep track of law enforcement trends throughout California so that we can keep our readers better informed.  On top of that, the motorcycle accident lawyers at Riderz Law are happy to give you (free!) advice on fighting the ticket. 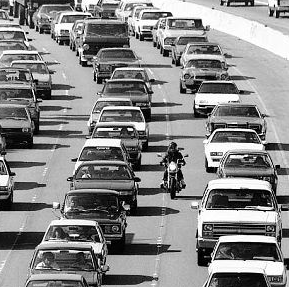 Remember that just because lane-splitting is not illegal, doesn’t mean that it’s a license to speed or break other laws.  You can be given a citation for speeding, reckless driving, unsafe lane change, or any number of other traffic violations.  Additionally, it can be a treacherous practice.

Is Riding Between Lanes on a Motorcycle Safe?

Most car drivers (and many motorcyclists) consider lane-splitting unsafe.  But is it?  Studies show that it may not be as dangerous as most people think.  As discussed in my blog back in December, a USC study commissioned by the U.S. Department of Transportation found that lane splitting is actually safer than sitting in stop-and-go traffic, where bikers are far more likely to be “sandwiched” between two cars.   “For a motorcyclist, that’s the safest place to be,” Professor Harry Hurt said shortly after releasing his study. “A lot of people think it’s a hazard, but the cold, hard facts are that it’s not.”

Of course, riding a motorcycle always comes with a degree of danger.  You can’t control what other drivers will do — and you can’t always predict the stupidity or negligence of others.  But from personal experience, both as a life-long biker, and as a motorcycle accident attorney, I believe that lane splitting is safe if it’s done safely — that is, at reasonable speeds for the given situation, and only by an experienced rider.

The simple fact is, many bikers zip through traffic as though the notion of getting cut-off by an inattentive driver is ridiculous.  This is a recipe for disaster.  I’ve handled far too many motorcycle accident lawsuits that result from drivers jumping across a double-yellow and cutting off a lane-splitting biker.  In most (but not all) of these cases, the motorcyclist was riding way too fast — either too fast for the situation, or sometimes even far in excess of the posted speed limit.  And often, these bikers have been inexperienced riders, having ridden a motorcycle for less than a year or two.

If you chose to split lanes, please do so safely.  Traffic in California can be treacherous.  Just take a ride around the mean streets of Los Angeles, San Diego, or San Francisco (where I was hit by an uninsured driver ten years ago), and look into cars at the drivers.  It seems like half of them are texting or talking on their phone without a headset.  And who knows how many have been drinking? 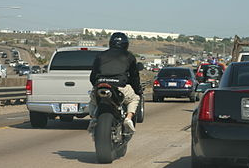 The fact that “it was the other guy’s fault” won’t put you back together if you’re badly injured in an accident.  We’re expert motorcycle accident lawyers, and we’re happy to help you if you are in an accident.