I swear. Who needs enemies when you have friends like mine?

It was June, already a hot day at Thunderhill Raceway and there I was feeling the heat of having to learn to ride my 09 R1. My friends weren’t any help, as they were like sharks that circled me as I paddled gingerly on my new ride. They would pass me out on track like I had never done this before. When they did, I remember thinking to myself, “oh, so that’s what it feels like…”

Passing me was a realistic goal to my friends that day, and they made sure to finally tick it off their life’s to-do list. And there was nothing I could do about it but be a sitting duck. 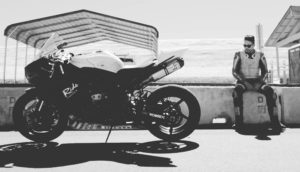 Just before the first tango

I did try to give myself an edge for the first ride, putting on the same Pirelli tires I’ve used my whole track life, just to give myself some sense of familiarity within the bike. At least I knew the tires, how they’d grip and handle my riding style. But truth be told, even that didn’t matter. The first time riding the 09 R1, it behaved so differently – for better and worse – than my 02 R1, I couldn’t even push the pace for the tires to matter.

The first thing I remember hitting me when the bike and I finally rolled out on track for the first time was how quickly it steered. I don’t know how or why, but it just does. Quicker than my 02 R1. And I really shouldn’t have been surprised. I had known this from riding a friend’s 09 R1 years before, but maybe it had been so long I had forgotten. Or maybe my 09 R1 steers even quicker after it had been trimmed of a good amount of its weight as a purpose-built track bike. It would just fall on its side so easily, which isn’t a bad thing per se, but it didn’t exactly ease my nervousness over having to learn to ride the bike for the first time.

And the throttle response made matters worse. It’s the characteristic of the fly-by-wire throttle (see: snatchy) mixed with the re-flashed ECU that seemed to have eliminated any existence of lag when you twist the throttle. So they made for a very direct, but also a very abrupt throttle response. This is in direct opposition to what I had been so used to in my 02 R1. The throttle spring on that bike was so heavy to the pull, my friends would even shake their heads whenever they tried to twist it open and ask me, “how can you even ride this thing?” I would just shrug and tell them that that was basically my ‘traction control.’ 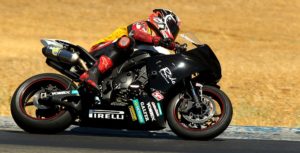 Sometimes a picture is only worth one word: hesitant.
(photo by gotbluemilk.com)

And there I was on the 09 R1, a bike that was eager to fall to its side and lurch forward on the gas as soon as I even thought about twisting the throttle. I was nervous, but the bike was eager. But this wasn’t one of those sometimes-you-have-to-lead-and-sometimes-you-have-to-follow arrangements. The bike wasn’t going anywhere until I was ready, but it sure was quick to telegraph to me that it was ready to go, go, go. I already knew I had to get acclimated to this bike quickly, as quickly as it ate up pavement in between the corners like my 02 R1 never could. That was the one thing the bike made clear to me: It didn’t know the meaning of slow.

And I just had to do everything I could to get up to its speed.