California Knife Laws 2020 – Is It Legal to Carry One?

Bikers always seem to inquire about the knife carry laws in California.  After researching the law, we certainly understand why confusion exists as to what is legal to carry and what isn’t: there are over a dozen statutes on the subject, as well as numerous municipal codes, and inconsistent court decisions that further muddy the water.  Hopefully, this article will shed some light on the rules and inconsistencies in California knife laws.

A few caveats, however:  First, remember that carrying any weapon, even one that’s legal, can cause you a lot of grief with law enforcement.  Cops routinely write tickets and make arrests for things they incorrectly think is illegal.  Being found “not guilty” will not make up for the time and aggravation of getting arrested and missing work — not to mention the cost of hiring an attorney.  Also, this article only covers California law.  State laws can vary greatly, and taking a knife that is legal in California over state lines may get you into trouble with federal laws or laws of other states.  Local ordinances may also impact the legality of your knife.

With those warnings out of the way, California laws covering many types of knives including switchblades, daggers, and disguised blades are discussed below.

Q. How Long Can a Knife Be in California?

A. In the State of California, there is no maximum length for knives in general. However, the maximum legal length for a switchblade knife is 2 inches. Additionally, it is illegal to carry daggers or dirks concealed, and also illegal to carry many types of knives which are designed for concealment.

For those of you with a short attention span, here is the summary:

Each of the above issues is discussed in greater detail below. 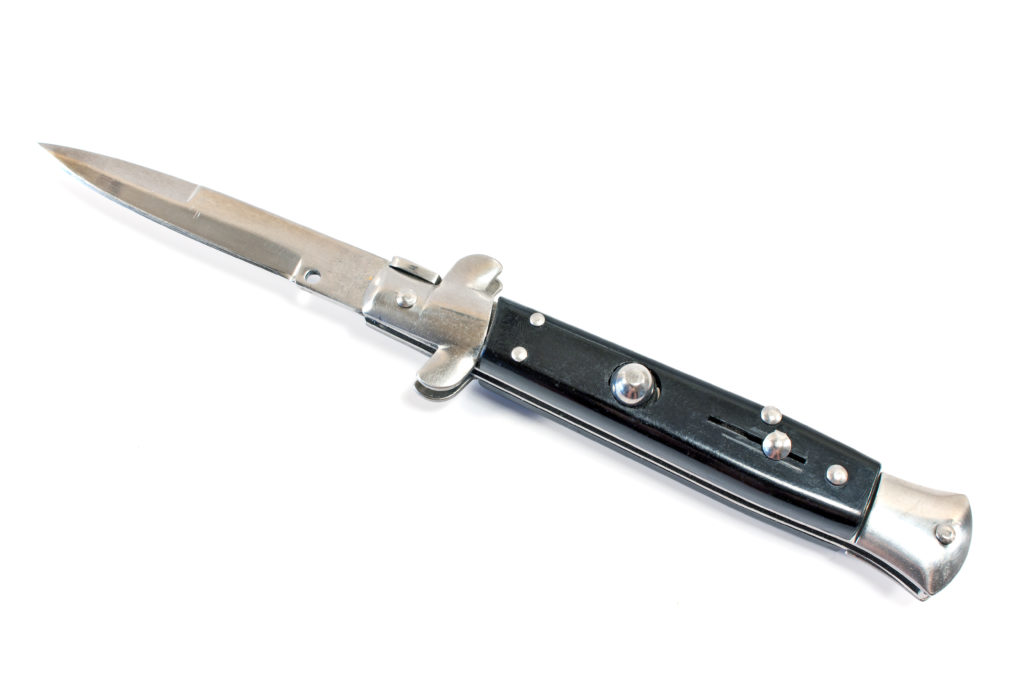 Q. Are Switchblades Legal in California?

A. Switchblades 2″ and larger are  Illegal to carry on your person or in your vehicle and are illegal to sell, loan, or give away in California.

Switchblades and other spring-loaded knives in excess of 2″ length are illegal to possess on your person or in your vehicle in California, and are also not legal to sell, loan, or give away. Included in the legal definition of switchblade is “[any] knife having the appearance of a pocketknife and includes a spring-blade knife, snap-blade knife, gravity knife or any other similar type knife, the blade or blades of which are two or more inches in length and which can be released automatically by a flick of a button, pressure on the handle, flip of the wrist or other mechanical device, or is released by the weight of the blade or by any type of mechanism whatsoever.”  The statute expressly excludes pocket knives that can be opened with one hand by pushing the blade open with one’s thumb, as long as the knife “has a detent or other mechanism that provides resistance that must be overcome in opening the blade, or that biases the blade back toward its closed position.” see Cal Pen. Code, § 21510 for exact statutory language of this misdemeanor infraction. See also CalCrim No. 2502 for California jury instruction regarding switchblades. 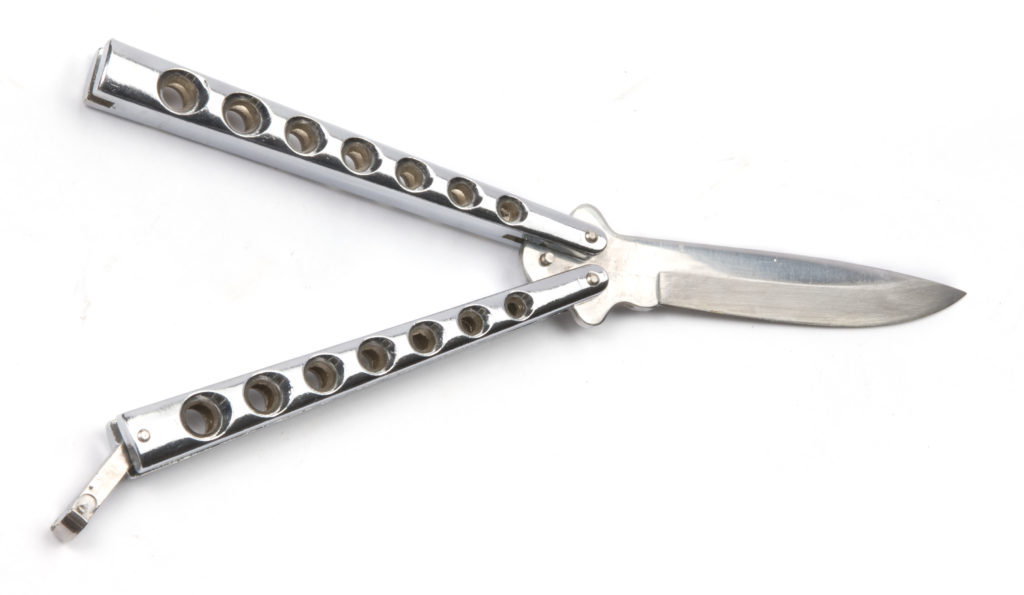 A. No. Butterfly Knives are Illegal to carry in California

A. No. Spring-Assisted Knives are Illegal in California if they exceed 2″ in length.

It should also be noted that a pocketknife that was legal when manufactured, but is broken or modified so that it will open freely, is a switchblade within the meaning of the statute. For example, in the 2008 case of People v. Angel R., the Court of Appeals examined a conviction over a pocketknife that, as originally manufactured, had a hole in the back of the blade that prevented it from flicking open. The trial court found, however, that the knife had been modified or damaged, and the resistance mechanism did not function so that the knife would open with a flick of the wrist.  Despite the original design of the knife, the Court of Appeals upheld the conviction.

A. No. Disguised Blades are Illegal in California.

Any knife or blade that is disguised so as to not look like a weapon is also illegal in California.  This includes, cane swords, belt-buckle knives, lipstick case knives, air gauge knives, writing pen knives, etc.  Blades that are undetectable to metal detectors (e.g., ceramic blades) are also illegal.

Q. Are Knives Legal to carry on School Grounds in California?

A. It Depends. Many types of Knives are Illegal to carry in and around schools in California.

It is important to note that Penal Code § 626.10 has very broad exceptions for the 2 1/2″ blade length limit on school grounds for lawful uses such as food prep, eating, residences, and scope of employment.

Q. Is it Illegal to Scare someone with a knife in California?

A. Yes. It is illegal to brandish a knife in California.

In California, it is illegal to brandish any deadly weapon, including knives.  The law states that it is unlawful for any person to “draw or exhibit any deadly weapon . . . in a rude, angry, or threatening manner, or . . . to unlawfully use a deadly weapon.”  This does not include use of such a weapon in self defense.

Q. If I only carry knives which are legal within the State of California, will I be certain to avoid legal trouble?

A. No. Local Ordinances may be even more restrictive than the California State laws, subjecting you to additional restrictions.

Local Ordinances – Here’s Where the Law Gets Messy

If the laws above seem confusing, as the saying goes, “you ain’t seen nothin’ yet.”  Local ordinances vary from city to city, and county to county.  Worse, California courts have been inconsistent in ruling on the enforceability of these local laws.

What is even more interesting is that other, more recent cases completely contradict the decision in People v. Bass.  In the 1985 case of People v. Gerardoi, the defendant was charged with violating a local law of the City of Commerce that is nearly identical to the Los Angeles local law prohibiting carrying blades over 3″.  On appeal, the defendant cited the Bass case, arguing that the city code was invalid.  The Gerardoi court rejected the holding of Bass, and found that the city code was valid.

Where does all this information leave us?  The short answer is, in a mess.  There are certainly things that are illegal: any switchblade with a blade 2″ or longer, or concealed possession of any knife with a fixed blade.  Other knives may or may not be legal, depending on how and where you carry them, and where you are in California.  The best this to do is to check local ordinances before deciding to carry a knife or any other weapon in California.  Better yet, think twice before carrying a knife.  As you know, some cops look for any excuse to hassle bikers.

***
This article is written for informational purposes only and is not to be construed as legal advice.