Sy Nazif is a nationally-renowned attorney and the co-founder of RiderzLaw.  Sy grew up in Pittsburgh, Pennsylvania.  Shortly after high school, he attended the American Motorcycle Institute in Daytona Beach, becoming an AMI Certified Motorcycle Mechanic.  A few years later, Sy returned to his home town and went to college at Robert Morris University, where he earned a bachelor’s degree in Finance.

After graduation, Sy decided he needed to live in a place with a year-round riding season, so he headed west to California.  A few years later, Sy got his law degree from the University of California in San Francisco, one of the nation’s best law schools.  After spending a few years working for wealthy corporations, he soon decided that he should be practicing law for the people he cared about — fellow motorcyclists.  Sy began this journey working for Aid to Injured Motorcyclists (AIM), the National Coalition of Motorcyclists (NCOM), the Coalition of Independent Riders (COIR), and the Confederation of Clubs (COC).

Looking to continue this work, but wanting to provide his clients more personal attention, Sy began his own firm, and RiderzLaw was born.

Sy rides motorcycles almost every day, and is an “expert status” WERA motorcycle racer.  He is the co-owner of RiderzLaw Racing – a team that competes in MotoAmerica and other motorcycle racing events across the country and around the world. 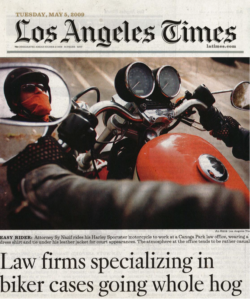